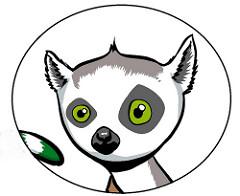 I, uh, owe everyone an apology. You see, I got into some bit of trouble at the TBB compound. I found this room, right, and it was nice and warm and had the BEST multicolored vines. It turns out those were important? Andrew called them “cables.” Chris found me chewing on them for a snack. I had to go into hiding after that, cause Iain apparently missed something called Downton Abbey? I don’t know what that is, but apparently it’s extremely important.

I’ve been helpin’ around now that they’re less mad at me. I’ve been told that I will not be included in Ralph’s upcoming experiments, so that’s nice. I am not allowed to go anywhere near any of the vehicles, boats, planes, bicycles, or anything form of transportation. Simon said I was grounded.

Since it’s been so long since I’ve gotten to snack on some fanmail, I went a little overboard!

Are you concerned at all about the growth of electronic online comments as a threat to the traditional lemur fan-mail diet?

Nope! I like ‘em a lot! The electronic ones help me keep my tail green.

I’m disturbed by the fact that your tail doesn’t match the green of the BB logo. Didn’t your mom teach you how to dress?

I…I hoped you wouldn’t notice! I hope if I eat enough fanmail, it’s gonna match the TBB green. That’s what they tell me anyway. Andrew would never lie to me.

Why won’t LEGO bring back 9V Trains and monorail and old grey? Bionicle came back! Why does LEGO hate us?

When I asked Dan, he went off muttering about changes in markets, and business models, and told me to go read Brick by Brick. Personally, I think the newer grey tastes better.

Who makes the tastiest MOCs: Simon or Nannan?

Nannan’s taste good, but I have very weird dreams afterwards. Simon makes a lot of MOCs, but he hides them away so I don’t get to nibble much.

What’s the chance of a render to make it to the blog?

Ooooooh, they do sometimes. I asked Josh. He said that they don’t intentionally leave them out, but the ones they post are really really good (and tasty!) so you might not know it was digitally rendered!

Mr. Lemur, do you prefer tea or coffee as your caffeinated morning drink.

I’m not allowed to have caffeine. The last time they let me have it we lost three contributors. Literally lost them; it took me a month to find them!

Okay, I gotta go! Caylin says I’m supposed to be her minion at BrickCon, and I have to start training now. See you all next week!

2 comments on “Ask A Lemur – Monorail, MOCs, and Renders”