Greetings, Dear Readers! I’m back and I’ve missed you so much! 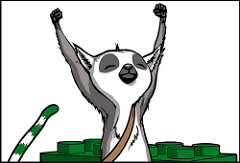 It’s been quite a hectic month. I apologize for being off-line for so long. Several things happened to stop me from posting, all of which were beyond my control. First off, groceries and supplies were getting low, here in the TBB compound. Though she knew better, Caylin sent me on a supply run to Costco. They have such an incredible array of samples there! I tried all of them several times, to make sure the quality was good, you know. Just to be thorough, I also performed quality control tests on the playsets, mattresses, office furniture and TVs. You never know when that kind of information might be valuable. That took awhile. Plus they don’t accept paw prints as a valid form of identification. I think that’s discriminatory, but I digress.

After spending a couple of weeks on my supply run, I got back to the compound to find that Iain was performing server tests and needed me to crawl down the Jeffries tubes to check out some problem areas. I did it, but accidentally caused some “downtime”. It’s not my fault all the pretty colored wires look so tasty. Seriously. If you aren’t supposed to knaw on them, they should be more boring to look at.

Apparently this upset the bosses and my internet privileges were revoked. Fortunately I found were Andrew writes down all his passwords, so I’m back! I really have missed you all very, very much.

On to your questions…

What is your opinion on Lego Role-playing games such as GoH, LoR or LOM?

I think they are awesome! Anything that promotes building and strengthens the community is a great thing. For those who might not know, Guilds of Historica, Lands of Roawia, Lands of Mythron are fantasy-based role-playing projects that require the participant to build scenes to advance the storyline of their characters. There are other projects as well, including Space and Super Hero themed role plays. These projects are great for bringing together like-minded builders and encouraging creative story-telling and unique building.

They have a few downfalls, namely that it can be daunting to join, because so much has gone on and it is hard to get a grasp on the previous history of the project. Also the advanced level of building can be intimidating to newer builders. However, this shouldn’t stop those who are interested. Dive right in, it can really be a blast!

What is this “Super-Jumper” piece from the new Marvel and DC sets?

The “Super Jumper” is a new piece in many of the Super Hero sets. It is transparent U-shaped piece that acts like a spring. If you attach a minifig to it and then flick it with your claw or fingernail, the minifig is propelled on a short flight. It’s a odd piece…mostly included for play-value rather than it’s use in building. I am curious how the Adult Fan community is going to use it though. Perhaps I should conduct a challenge? Let’s do it. Build something using the Super Jumper in a unusual way and post a link in the comments. I’ll pick my three favorites and send the builders a personalized, hand-signed picture of myself, along with some other Brothers Brick swag. Sound good? Get ready. Get set. Go!

How do your human overlords decide when it’s time for new contributors?

Andrew and Josh purchase new contributors when the batteries die in the old ones. Sometimes they refurbish the old ones but other times they look for newer models. It all depends on the current blog needs and such.

Thanks for all your questions! I hope I was somewhat helpful. Keep them coming and keep on building!

With much affections,
A. Lemur