Brick Warriors has been releasing some really interesting items lately. Having bought some of the new items and some old, I thought I would share my thoughts, as it’s been a while since we reviewed Brick Warriors here. 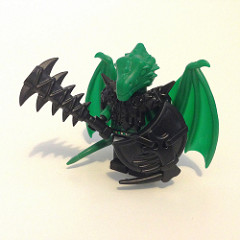 The first new item that caught my eye was their Dragonman Head. It has really nice detailing, including forehead ridges, spikes on the side of the head and segmented scale up the back of the head. The nose/snout and jawline slope sharply down and forward, giving the head a really nice profile. The fit is excellent, not too tight or loose. The head is available in 5 colors: Black, Gold, Green, Dark Red and Brown. I bought a green, dark red and brown. All three are a very close match to official LEGO colors. There is a slightly different feel to the plastic in comparison to LEGO, but it is barely noticeable. When combined with Brick Warrior’s Dragon Wings and either the Dragon Tail or the Barbed Tail, you can make a great Dragonman figure. 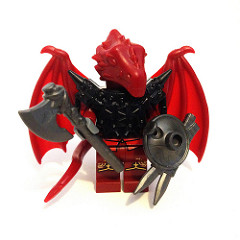 Supplementing the release of the Dragonman head, they have also created a Lizardman weapon, armor and shield. I picked up a couple of the armor pieces and one each of the weapon and shield. The details on the pieces are really cool. The armor looks like it made of stitched-together plates and has a nice fantasy feel to it. It has a large spike on each shoulder, two clips on the back for wings, and a single, hollow stud for the tail. The weapon is spiked club that looks like various teeth have been fastened to it. The shield is probably my favorite. It is a scalloped circle with what appears to be the jawbone of a dragon lashed onto it. Quite the barbaric piece! 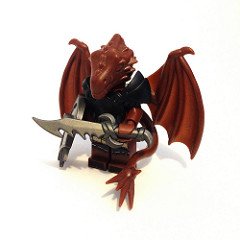 I ordered all the Lizardman pieces in black, so there are no color issues at all. There is one minor issue with the armor in that the wings are a bit loose, especially on the left side. The wings fit tightly on the Demon armor and in official LEGO clips, so it is only an issue with the Lizardman armor. The wings stay on and are still easily posed, so the issue is minor. To change things up a bit, I also ordered the lantern shield, bearded axe, demon sword and demon shield to go with the other two dragonmen. All items have excellent detail and fit perfectly. These dragonmen and accessories are a huge hit in my house! I originally ordered a single green dragonman, but each of my boys decided they had to have their own. After raiding on their piggy banks and two more orders later, three dragonmen now live in my home…but in completely separate collections.

Along with the newly released Dragonman and Lizardman items, I picked a few things older items that I’d had my eye on. These were Brick Warriors’ Jester Accessories, Thug Armor, Wizard Hat, Crutches and Arrows. 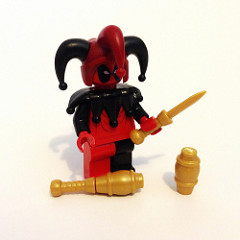 I’m really happy with the Jester bits that I ordered. BW’s jester hat is ordered in pieces. You pick out the color of the center piece and then choose plumes for the sides. This makes it possible to create a jester from a wide range of color combinations. I ordered a dark red center and black plumes. The dark red is a great color match and the fit of the plumes to the hat is perfect. I also ordered the jester collar and juggling pins. The collar really finishes the Jester figure and the pins are awesome! They work perfectly as juggling pins but you can pull off the drum section and reveal hidden daggers. Quite nice if you want your jester to be an assassin in disguise! 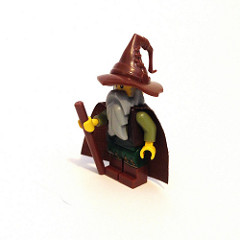 The wizard hat is another great piece. I ordered mine in brown, so I could build a Radagast figure. The color match is spot-on. The hat has a floppy, worn look to it. With stitching on the side and a patched and bedraggled point, this would make a great addition to any down-at-the-heels wizard you might want to create. It fits perfectly, not too tight or loose. A minifig can also grip it at the patched part of the point. 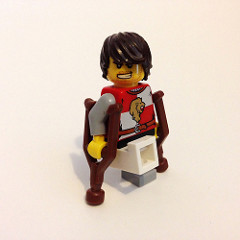 The crutches are a fun accessory that can be used in just about any genre or theme. I have mine on a Castle knight just because he was laying around, but they would fit in any time period. Each crutch is molded to fit around the minifig arms and the length is surprisingly perfect. They actually do help hold up and stabilize a one-legged minifig! I thought balancing the fig would be an issue but thankfully I was wrong. These crutches were really well thought out and are a great accessory! I may have to pick up a couple more pairs. 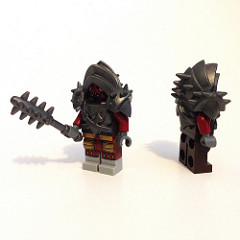 The Thug Armor is big, bulky and a lot of fun. Again, the details really shine on this one. It is a one-piece suit and consists of an angular breastplate with straps, spiky shoulder pads, massive segmented armor on the head and covered in spikes on the back. It’s a very big piece, so don’t buy this for light troops. It’s meant for those who want something large, slow-moving and looming. It is perfectly named! This is armor for Thugs.

Overall, I was very impressed with all the items I ordered. The detailing is fun and whimsical, the color match is really good and the fit on nearly all the items was perfect. If you want something a little bit different, I recommend these items. Ryan and his crew are doing a really good job!