I had an opportunity to review LEGO Movie 70814 Emmet’s Construct-o-Mech Building Set,

Overall? I like the set. I think it’s got an excellent selection of parts overall. I enjoyed the build thoroughly. There are some excellent details to the model overall that make it appear particularly impressive. It looks really nifty. Also? Angry!Unikitty.

After having built it, though? I can’t say I’d pay full price for it.

Let’s explore more, shall we?

The set itself comes packaged in 5 bags, providing you the parts for the core torso, torso detail, legs, arms, and decorative bits. I did appreciate that the instructions and stickers came individually bagged, so the instructions were not bent, and laid flat while I was building.

I generally don’t put stickers on, unless it’s a set I don’t intend to use for parts and plan to just display, like the Cafe Corner creator sets. In this case, I opted to sticker. I have to say I was disappointed; I like my stickers to not obviously be stickers, but in this case, the yellow brick and yellow printed sticker don’t match. 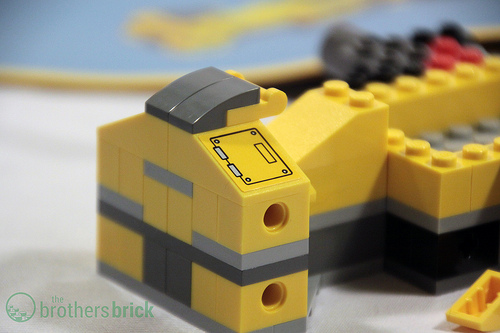 Part of the reason I enjoyed the build is that mechs are outside of my build style. If you asked me to build one from scratch, I’d have more than a few failures before I got anything that I was happy with. And I enjoyed that this one was not a studs-up design, so it gave a lot of opportunity for fun design things.

One thing I particularly enjoyed was what I think of as the “face.” It was a pleasant surprise for me. 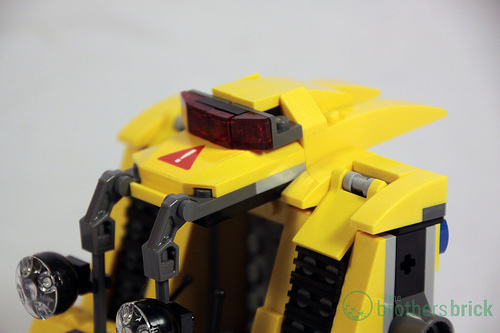 I have no idea if it’s directly referring to anything, but I had a nice, “Oh that’s nifty!” moment when I attached the piece and realized there were eyes lookin’ back at me.

But here’s where the model goes from fun play features to nothin’. The legs on this look nice. Great details that show off their origins as construction vehicles. But the legs don’t actually move. They’re fixed; there’s rotation in one joint, at the hips, so the mech can bend over. No articulation in the ankles or knees. That disappointed me.

The arms were less disappointing. They had appropriate articulation at the shoulders, elbows, and wrists, and I liked the little pneumatic detail on the sides. 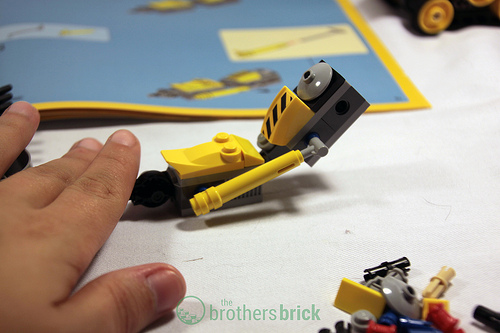 Once the details are on, it’s an impressive looking model. I’ll keep it built, and I enjoyed the build, but I’m overall sad at the lack of articulation in the legs.

If that doesn’t bother you, then enjoy! Buy the set. It bothers me, but not enough to say don’t buy it entirely.