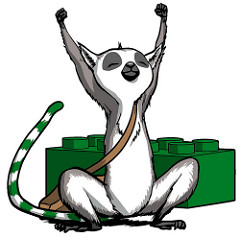 I’m so happy to speak with you again. This week has flown by and it was all very fun and exciting! Though, to be honest, I’m quite worn out from all the activity. As fun as it has been, it will be nice to get back to normal life. How are your holidays going? I hope very well and tasty. I swear that I must weigh all of twelve pounds now! It’s so hard to turn down all the bits and such laying about. And the wrapping paper! Oh, so very yummy. I’m still stuffed.

I finally got the office cleaned up and everything back in its place, which is refreshing. We had a bit of a holiday bash last night and it took its toll on the facilities. The worst were the reindeer hoof-prints all over the ceiling. I hope we don’t invite them again next year. You can’t really comprehend the phrase “There arose such a clatter” until you’ve heard Simon and eight tiny reindeer singing bawdy drinking songs until all hours of the night.

Anyway, enough about me! On to your questions!

Is the Lemur going to any conventions? What conventions will be graced by The Brothers Brick contributors?:
I plan to attend as many conventions as I can this year. Conventions are a ton of fun! I don’t know which conventions each of the contributors plans to attend but I’m sure most of them plan to attend at least one. Ralph tends to represent us at various British and European conventions, though he has attended some conventions on the east coast of the US in the past. I know Simon attends as many North American conventions as he can. There is usually a large contingent of contributors at BrickCon and BrickWorld. Keep an ear to the ground as your favorite conventions come nearer and we may have more information as to who will be appearing at which venue. If you see me at a Con, please feel free to say hello. Conventions can be overwhelming and it would be nice to see some friendly faces!

Please explain the various scales used in LEGO building:
There are quite a number of different scales in which people build. “Minifig Scale” is probably the most common, as well as the hardest to define. You see, minifigs are not scaled down human beings, so their dimensions can make things difficult. When creating buildings, most people use a minifig’s height as the defining measurement, but when building vehicles, their width is often most used. There are, of course, many exceptions to this, but many people still hold on to some version of “minifig scale” as their scale of choice.

Another common one is “Micro-Scale”. Again, there are variations but this generally refers to any build that is smaller than minifig scale. Sometimes a single 1×1 brick will be used to represent a person but at other times, the scale will be smaller or bigger than that, depending on the builder.

“Miniland-Scale” is a scale in which a person is generally represented as being 11 bricks high, three studs wide at the waist and 2 studs deep. The scale is most often seen in the miniland sections of various LEGOLAND parks and such. The scale derives its name from these sections of the parks. It quite an interesting scale. I find it amazing how creative people can be at this scale.

Some builders also build “full-scale”. It is amazing how realistic and life-like full-size LEGO creations can be. I’ve seen some life-size food models lately that looked so real, I didn’t realize they were fake until it was too late.

There are, of course, many other scales but these are a selection of the main ones. The memory of those food models is making me hungry. We’d better move along.

What is figbarf?:
When I first heard of this, I was disgusted and figured that I would have to clean it up. Apparently it has nothing to do with what I thought it did. “Figbarf” is a LEGO fan community term for excessive building of minifigs. Building hordes of minifigs can be a ton of fun and almost impossible to stop once started. The term was originally coined by minifig-haters as a derogatory term for the masses of figures that some builders were turning out on a daily basis. The term has now been embraced by a large percentage of the fan community and is often used by the builders themselves. One example might be of a builder posting a new World War II unit he or she has built and described as “Had some time for a bit of FigBarf today. What do you think?”.

Personally, I have issues with the term. I like minifigs quite a lot and seldom have any regurgitation issues where they are concerned.

Thank you again for your questions! Have a great week and remember…the Lemur cares!

With much affection,
A. Lemur

4 comments on “Ask A Lemur – Minifigs, Conventions and Scale”