This weekend, in the Netherlands celebrations are being held to commemorate the 70st anniversary of Operation Market Garden. This was a bold attempt by the Allies to capture bridges over a number of important rivers in the Nazi-occupied Netherlands and build a bridgehead across the river Rhine. This would bring their forces to the doorstep of Germany’s industrial heartland and, in the words of Field-Marshall Montgomery, would end the war in Europe before Christmas 1944. Airborne Troops were dropped far behind enemy lines to capture the bridges, while ground troops fought their way from Belgium through the Southern Netherlands to relieve them. 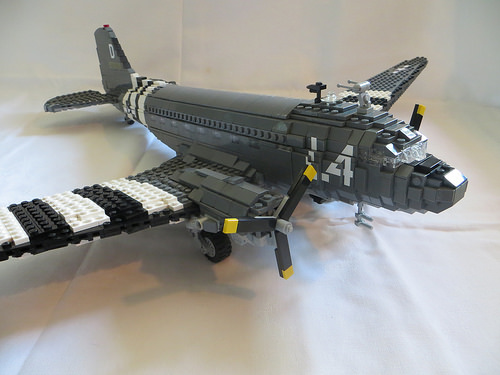 It was one of the largest airborne operations of the war, which inevitably involved large numbers of C-47 Skytrain transports, such as the one built by Kenneth Vaessen, still marked with the black-and-white stripes that were applied to aircraft that participated in the D-day landing a few months earlier. (Kenneth actually posted it a few weeks ago, but I decided to wait for this opportunity to write about it.)

Unfortunately, things didn’t work out as planned. The relief columns were held up and German resistance, in particular in Arnhem, was much stronger than anticipated. The allied advance was halted, thousands of Allied troops were killed, as well as thousands of German troops and numerous Dutch civilians. The war lasted eight more months, but much of the Southern Netherlands was liberated during the operation by soldiers from Canada, the UK, US and Poland.