A few months ago Kenneth Vaessen unveiled his 1/36 scale model of a Russian Tu-22M3. The reason why I didn’t blog it back then is that his pictures were taken against a fairly dark background. However, he has now posted this newly edited version. 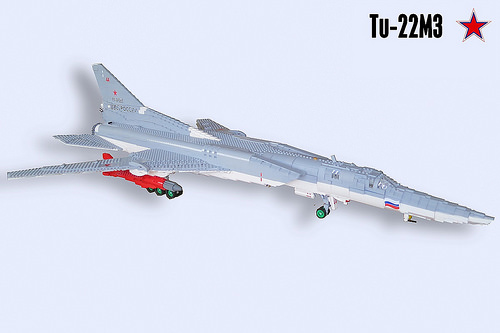 The Tu-22M3, named the Backfire-C by NATO, is a supersonic bomber developed in Soviet times. The Russian military went through rough times after the collapse of the Soviet Union and its Backfires are getting long in the tooth, but they are still impressive-looking machines. Kenneth has done a fine job recreating the sleek look. His model is 1.17 m long (almost 4 ft), is beautifully shaped and has many working features such as working variable geometry wings, a retractable undercarriage, opening cockpit canopies and an internal weapons bay. There don’t seem to be all that many LEGO builders willing to tackle scale models of military aircraft, certainly not compared to, say, Star Wars models or mecha, so it is always a great pleasure to welcome a new member to the flock, certainly one who produces models this good.

2 comments on “The workhorse of the Russian bomber fleet”