During WW2, the Grumman Corporation was the main builder of fighter aircraft for the United States Navy. At the start of the war, they built the classic F4F Wildcat. This was only the second US Navy fighter with then novel features such as a fully enclosed cockpit and a retractable undercarriage, but it was outperformed by the Japanese Navy’s A6M Zero. To counter this threat, the Wildcat was followed by the larger and more powerful F6F Hellcat. 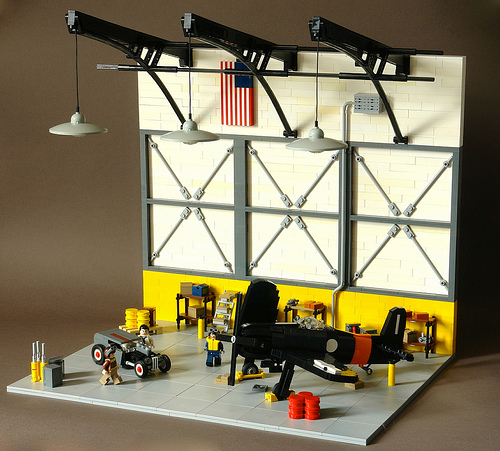 Sydag has now built the ultimate Grumman prop fighter: the F8F Bearcat. For this Grumman fitted the Hellcat’s R2800 Double Wasp engine to a much lighter and smaller airframe. The result was a bit of a hot rod, with far superior performance. The aircraft also incorporated a bubble canopy, greatly improving the pilot’s view to the rear. Bearcats entered service too late to see combat in WW2 and, with the advent of jet aircraft, they were transferred to the US Navy Reserve, where they received the orange fuselage stripe visible on Sydag’s model. The aircraft were retired from US service in the fifties, but their performance made them an attractive choice for air racing and Rare Bear, a much-modified Bearcat, still holds several world records for propeller-powered aircraft. I obviously like the aircraft, but I like how it is presented even more, with part of a hangar as the backdrop and surrounded by maintenance equipment and aircraft parts, including a spare engine. The classic hot rod (the kind with wheels) is the proverbial cherry on top.