Generally, I am not particularly interested in sets and LEGO CUUSOO/ LEGO Ideas does not do much for me personally, but I have to admit that I was stoked when I found out that the Ghostbusters Ecto-1 by Brent Waller passed the design review and that LEGO were going to turn it into a set. I’ve been a big fan of the movie ever since I first saw it as a child. It is imminently quotable and still funny, thirty years after it was released and the car is a moviestar in its own right. 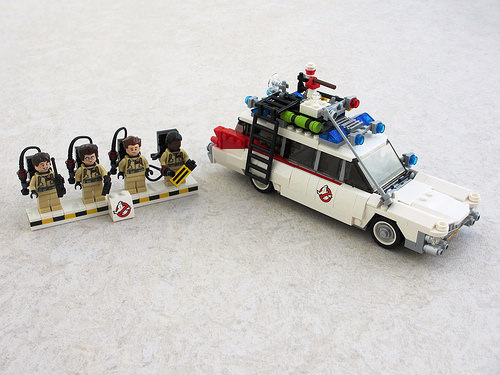 I think that the earlier Cuusoo Back to the Future DeLorean looked a bit disappointing compared to the design originally submitted to CUUSOO. Pictures of the Ecto-1 set looked pretty good, however, and I was eager to have a look at the model in real life. Last week, while on a trip, I came across the set in a toy store in Germany (for €49.90 ) and decided to buy it.

The Vehicle
The real car used for the movie was a customised 1959 Cadillac Miller-Meteor ambulance conversion. The 59 Cadillac is an icon of excess, known for its enormous aircraft-inspired tailfins and its ornate front, with a lot of chrome and double headlights. 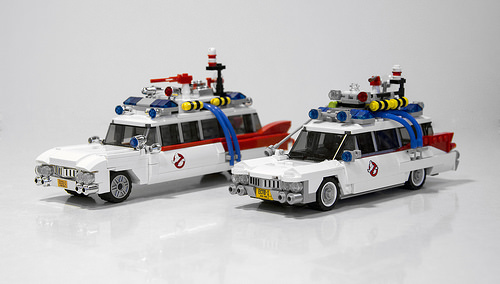 Brent’s original represented this look quite well and, as his own comparison picture shows, not much was lost when his design (on the left) was turned into the set (on the right). The car in the set is a bit less smooth, but it is also a bit smaller. This is a good thing in my book, but more about that later. Ecto-1 is a popular subject and a lot of builders have built their own examples. On most, including Brent’s original, the windscreen is too steep. On the set, however, the angle is just about spot on, but it does look a bit too tall. I built my own larger scale version last year and spent a lot of time poring over photographs of details of all the equipment and lights mounted on the roof. The set’s version is impressively faithful to the original. 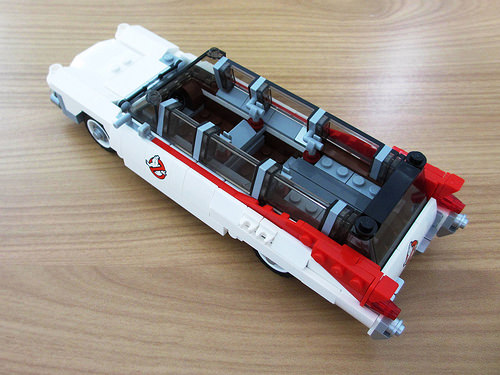 The roof of the model can be easily removed, revealing an interior large enough to seat three of the figures (in tandem) and one or two proton packs in the back. The sides of the body are mostly built using SNOT techniques, which keeps the tailfins nicely thin. The side windows are angled slightly, using a clever technique involving clips and bars. The set designers have done an excellent job. 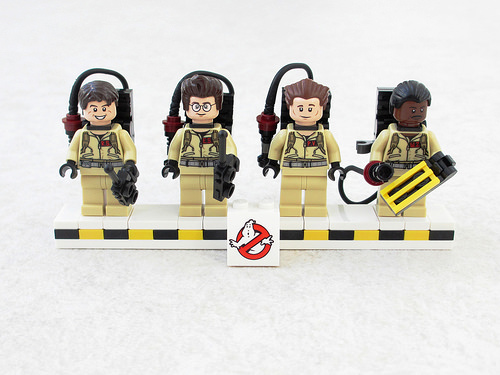 The set comes with four figures, each with a reversible head with two expressions. The characteristic smirk on Peter Venkman’s (Bill Murray’s) face is particularly well captured. All of them look good, although the Ray Stantz (Dan Aykroyd) figure may perhaps be a bit hard to recognise, except when combined with the other three. The figures have their own unique torsos, with the characters’ initials printed on the front and their first names printed on the back, even though this area is normally obscured by the neck bracket used to mount the proton packs. 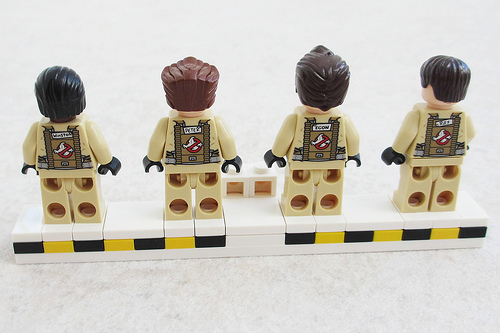 The proton packs themselves are nicely detailed, with a whip used for the hose and a printed part to represent the particle accelerator. Their weight does mean that the figures need to be pressed down onto a stud (or bent forward rather a lot) to prevent them from keeling over. Fortunately, the set comes with a nice display stand. The inclusion of a Ghostbusters logo and the yellow and black stripe running down its length are neat touches and mounted on the display, the four guys look great.

Parts
I didn’t count them, but according to the inventory, the set includes 490 parts. In my opinion, this is not a huge number for the price, but it is a nice collection with a lot of useful small parts. It also includes several parts that weren’t available before, as well as a few exclusive elements. For instance, it includes the new bracket 1×2 – 1×2, inverted in white (13 of them) and in red (2), as well as 1×1 round tiles in lime green and 1×1 round plates with open stud in dark red. The latter until now were only available in white and yellow. The front end of the car includes a few nice silver metallic elements, including 1×1 round bricks. The vehicles’ sides and rear include new 1×2 and 2×2 curved slopes, in white and in reasonable numbers. The set does not include any stickers. Instead it includes four 2×2 curved slopes with a crisply printed Ghostbusters logo, as well as 1×2 tiles with printed ECTO-1 License plates, that will certainly find their way onto my own model at some point.

Overall verdict
Ecto-1 is not cheap, but it has a lot going for it. The car is on par with models built by some of the best adult builders and the minifigs look good. I think the vehicle is very large compared to the figures and to other LEGO vehicles purportedly intended for minifigs. 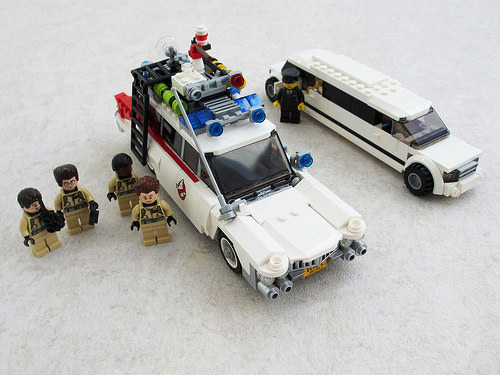 Of course, it would have been next to impossible to include all of the details in a much smaller model and I understand that, certainly for builders who want to play with their models, having enough room to fit figures inside is important. If you want to include this in your LEGO city display, however, it will likely look more than a bit silly. For that, I’d recommend building your own smaller version and I reckon that a fair few of the parts in this set will definitely come in handy if you do. If, like me, you are a fan of the Ghostbusters and/or a bit of a car buff, you’ll love this model as a stand-alone display piece and with the figures mounted on their stand next to it, their diminutive stature isn’t even all that noticeable.