LEGO has announced the release of a new product line called LEGO Fusion, which is a series of sets containing Lego pieces and a special Fusion brick that works with the camera on a mobile device to capture the creation and import it as a virtual model that one can play games and interact with. Each set retails for $34.99 and will be released in August 2014. Learn more fro the press release:

Each LEGO FUSION experience consists of a distinct set of LEGO bricks, a corresponding free downloadable app and the new FUSION capture plate, a small brick building plate with a printed design that enables a smart phone or tablet’s camera to identify the size and colors of the LEGO bricks built onto it. In response to game prompts, children build vertically in 2-D on the FUSION capture plate, enabling the app to ‘see,’ import and transform the creation into 3-D in the digital world.

“Children have always imagined their LEGO creations as immersive worlds which come to life for hours of role-play and adventure,” said Ditte Bruun Pedersen, senior design manager, LEGO Future Lab. “Recently, smart phones and tablets have become a popular platform for empowering game mechanisms that kids love. LEGO FUSION brings these two favorite play patterns together in an experience where real-life LEGO builds come to life in a virtual game, inspiring creativity, strategy, and the pride of creation.”

To Win, Step Away from the Screen
Once a child’s creation has been imported into the game, a series of challenges and interactions requires that players turn away from the device and return to the real world to use their LEGO bricks to build new solutions in order to move game play forward. Each game encourages this back-and-forth between physical and virtual, keeping children engaged in both worlds.
“In our research, we heard repeatedly from parents that they are constantly battling ‘zombie gaze,’ the experience when their children are immersed in their device screens for large blocks of time,” said Pedersen. “We developed LEGO FUSION with this challenge in mind, creating a play experience that keeps children entertained with the kind of app gameplay they love while giving real reasons to return to the brick pile to creatively build.”

Each LEGO FUSION product offers a distinct play experience. The four products launching this year are: 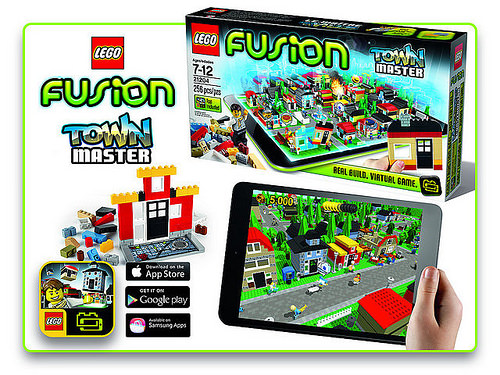 LEGO FUSION Town Master
In this simulation game, players create and rule their own LEGO town, first by building it with LEGO bricks, then by capturing it and importing it to the game. Children build everything from houses to a pizzeria, fire station and bike shop while completing errands and missions like catching robbers, fighting fires and skateboarding. To keep the minifigure citizens happy, players solve problems through physical building and earn points to gain access to more structures, and even run additional towns. 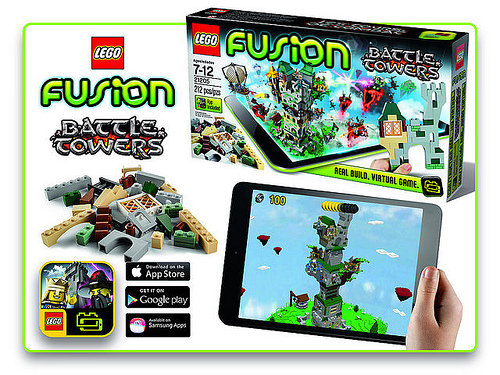 LEGO FUSION Battle Towers
Players build a tower and defend it against attack so they can rule the kingdom. First, players design the Battle Towers with real LEGO pieces, then capture them and import them to the game. Next, players choose tower defenders like wizards and archers and battle against evil warriors, skeleton armies, and more. If a tower is damaged in battle, players can repair the damage with a timed build with the game’s real LEGO bricks. 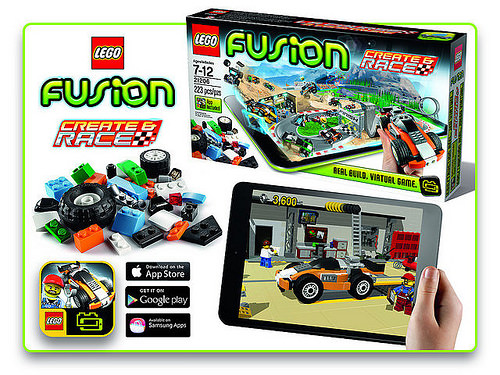 LEGO FUSION Create & Race
In this racing game, players get behind the wheel and virtually drive the cars that they create with real LEGO bricks. Once a custom vehicle is digitally designed, physically built, and imported to the game, it can be optimized for success in racing, demolition or stunts. Players learn that every brick shape and color on the vehicle matters for performance. Three themed courses offer endless challenges unlocked by physical LEGO builds, and children can even ghost race against friends to top the leaderboard. 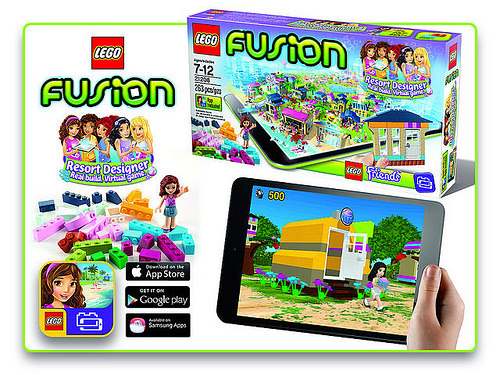 LEGO FUSION Resort Designer
Players help the LEGO Friends design new vacation houses, shops and activities for Ambersands Beach. After building 2-D facades, capturing them and importing them to the game, players can design the interiors of 3-D digital structures, such as an aquarium, surf shop and beach houses. Children can unlock new levels and build more resorts by completing missions like rescuing dolphins, riding horses, surfing and other resort activities.

LEGO FUSION Town Master, LEGO FUSION Battle Towers, and LEGO FUSION Create & Race will launch in August 2014; LEGO FUSION Resort Designer will launch in September 2014. Each will be available for $34.99 in LEGO Stores and Toys”R”Us stores in the U.S., as well as online at shop.LEGO.com and at toysrus.com.