Peter Dornbach (dornbi) has built a very neat model of a Cold War classic: the British Sea Harrier. The Harrier has a somewhat odd-ball appearance, which is captured beautifully in the model. The odd shape is largely due to the aircraft’s unique Rolls Royce Pegasus engine, which allows the aircraft to take off and land vertically. This ability is why it is sometimes known as the Jump Jet. 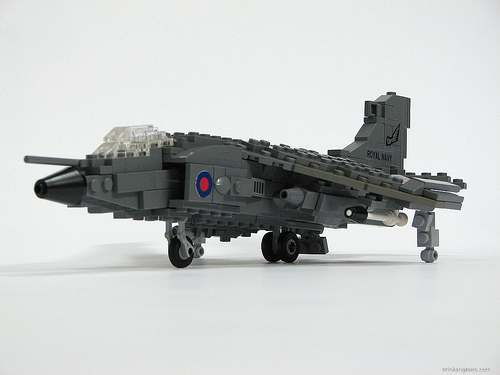 During the Cold War, many air forces worried about the vulnerability of their airfields to enemy strikes. Fighters that can operate from a much smaller strip, at a time of crisis, can be dispersed to smaller and better concealed locations away from their main base. Building a jet that can take off and land vertically is a big challenge, however. A whole range of different ideas were tried, including having additional lift engines mounted vertically inside the aircraft. This obviously was a very heavy solution. Using rocket boosters to launch a conventional jet from a short ramp worked, but left the jet in question with no place to land. The only successful design was the British Harrier, whose Pegasus engine has four jet nozzles that can be swiveled down to direct the jet’s entire thrust upward. Despite its diminutive scale of only 1/48, Peter’s model has these swiveling nozzles.

Its ability to operate without long runways made the Harrier an attractive choice for shipboard use. British Harriers gained most of their fame (or notoriety) in the 1982 Falklands War, where Royal Navy Sea Harriers, operating from small aircraft carriers, racked up about 20 air-to-air kills against the Argentinian Air Force and Navy, including against far faster Mirage fighters.