Guy Himber recently talked with me about his company CrazyBricks and his projects past, present and future. He also sent me some of the prototypes from his current SKULLS project as well as an early version of one of the add-ons, namely the GingerDead Man. The skulls come in three varieties. The largest one is my favorite, as it is the same size and proportion as the regular minifig head and most minifig hair can sit on it fairly naturally…though there is no stud, so anything you put on it is held in place by gravity. The other two skull varieties are a bit smaller than the large skull. One has a stud and the other doesn’t. The smaller skulls fit better inside helmets and cowls. The GingerDead Man is quite nice. He is a zombie variant of the CrazyBricks’ Gingerbread Man that is currently available. The printing is exceptional, made of a combination of both regular flat printing and embossed printing. Anyway, enough from me…let’s explore the mind of a builder! 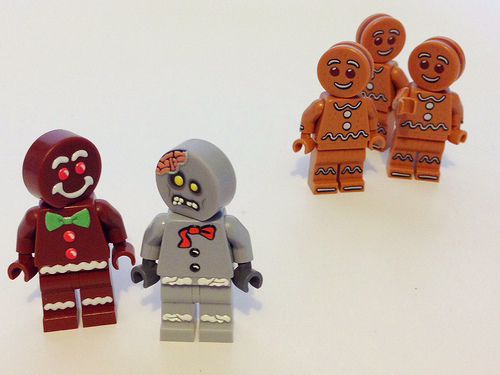 Josh– Hello Guy, thanks for sitting down with me. You are known to many of our readers as V&A Steamworks, the builder of steampunk creations. But now you have actually started a company called CrazyBricks. Tell us about the concept behind the company and the name.

Guy– Hi Josh!
I had done a number of side projects that I made available to other builders (The Big StovePipe Hats and CrazyArms) and really enjoyed the creative process. I found that as a side effect, I also enjoyed interacting with my fellow LEGO enthusiasts and sharing what I had made. These early items were all machined (versus injection molded) so there was a limit to how much I could create via this method. When the idea of Pigs vs Cows was proposed for last year’s BrickCon I decided it was time to take the next step and bring some of my ideas to market in the form of the Pig and Cow characters. Since this project went beyond my ‘hobby’ and into more of a business, I decided to form a company to sell them under once the Kickstarter project had funded and that Company became CrazyBricks – inspired by the CrazyArms I had made earlier.

Josh– It is obvious from your custom pieces and LEGO builds that you have design experience. What is your background and how has that influenced your work in the LEGO community? 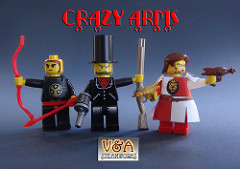 Guy– I come from the world of Special Makeup Effects and Animatronics in Film ( you can look me up on IMDB.com to see some of the 50+ films I have worked on ). Most folks know me from my work on Edward Scissorhands, Predator, the Underworld Trilogy, Stargate, Gremlins, it’s a LONG list! Working in film, I learned all about production methods for both prototyping and mass-production items and all of this experience goes into my work at Crazy Bricks. My design sensibilities come from this film work aesthetic.

Josh– The first two custom items you made were the Big Stovepipe Hat and the Crazy Arms. What drove you to make those pieces?

Guy– What drives me the most is the thought of – I really wish I had a ‘BLANK’. Whatever that blank is what I start thinking about building. The process to make one for myself is very similar to making one that everyone can use so it just becomes a natural extension of the creative process – to share what you have created. I can either make 2 very expensive ones or a large production run of affordable ones.

Josh– Your next venture was the Pigs vs. Cows heads. What was PvC all about and how did it work out? 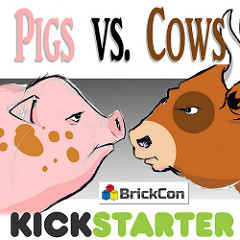 Guy– At the end of last year’s BrickCon, a number of theme ideas were being considered. With a bit of humor the idea of ‘Pigs vs Cows’ was proposed and it got the thumbs up. Realizing that there were only so many options available with the existing types of minifigs, it led to the idea of making minifig sized character heads for convention attendees to enjoy building with. Kickstarter was the best venue to gather the support for the heads which eventually grew to include Zombie Cows and Pigs as well as Cats and the option to get some fully customized limited-edition Gingerbread Men. It was a blast to be the creator! I also made some great connections and gained invaluable experience in the process of fulfilling the pledges for my Kickstarter supporters.

Josh– You have a new Kickstarter project up right now. Tell us about SKULLS, the idea behind it and how it is going? 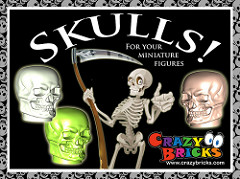 Guy– I always have liked the beauty and symbolism of bones. I had been tinkering with possible cranium designs at the end of PvC and had finally arrived at a design I was happy with. I love the idea of skulls because they can apply and beautify any building theme from Space to Castle.

Josh– SKULLS seems like a perfect Halloween custom project. Was there ever a plan to have it ready in time for Halloween?

Guy– The spirit of Halloween is certainly contained within the project, but it takes a number of months to finalize the production molds and run the final production parts. However, 2014 we be FULL of SKULLS! The balance of this year will be occupied by the many behind-the-scenes production aspects of finalizing the artwork and engineering the injection molds

Josh– Your next project involves pieces from the card game Munchkin. I’m a fan of the game myself. Can you talk a bit about making pieces from an established game and what you had to do to get permission to go ahead with that project? 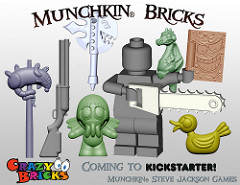 Guy– I had been introduced to the Munchkin card game ( if you haven’t played it yet, go out and get it! ) by some friends and instantly fell in love with it. A number of nights were ruined by staying up until 2 or 3 in the AM playing extending rounds filled with arguing and back-stabbing one another. The more you play the more you come to appreciate the unique humor and clever game-play strategies. Many of the weapons and iconic graphics of the cards are perfect for LEGO scale and the seed to create them got planted fairly early in my head as I continued to enjoy the game. 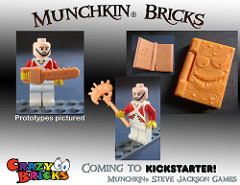 I had met Steve ( President – Steve Jackson Games, creator of Munchkin ) at BrickCon a few years ago and we had some discussions regarding Munchkin and the possibility of creating some of the items at minifig scale. He is a very active member of the AFOL community and really liked the possibility of bringing the Munchkin world to life. I have officially licensed out the rights to create the Munchkin Bricks project It will include: The Munchkinomicon – which is a fully functioning book with hinges and details on both the inside and outside, The UnNatural Axe – this one was designed with Will Chapman of BrickArms, The Chibithulu ( cute and adorable Cthulhu ), the Duck of Doom, the Triple Barreled Shotgun, The Shoulder Dragon ( really a forearm dragon, but who is looking?), the Bloody Chainsaw of Dismemberment, and the Rat on a Stick. There are plans for additional items too! 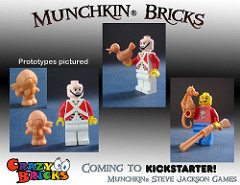 Josh– Do you plan to continue to fund projects through Kickstarter? Tell us about the pros and cons of using crowd-sourced funding.
Guy– I like Kickstarter because it is a very honest gauge of what people are really willing to get behind and support. There are some great ideas that only 20 people might truly want, and there are other ideas that surprisingly EVERYONE seems to want! This immediacy of support and sense of community is the big selling point of crowd-sourcing. It has been a very enlightening and enriching process and I have had nothing but great experiences with the web-site and the supporters I have met through it. Getting to meet your supporters live ( at BrickCon this year ) was even better! Their enthusiasm is contagious and makes me want to create more and more fantastic things to share.

Josh– Is there anything else you would like our readers to know about you or your projects?
Guy– After the Munchkin Kickstarter, I have a long anticipated project coming up that has been long over-due!
Details soon!

Josh– Thanks for talking to us and best of luck with SKULLS, Munchkins and your future projects!
Guy– Thank you.