Jim Jo is a new-comer to the Adult LEGO Fan community but that doesn’t mean he lacks building skills. His first project is a mammoth mosaic of Darth Vader. The mosaic measures 45 inches square and was done entirely without the help of actual mosaic-making software other than Excel for layout. All of the shading (or dithering) was done by eye, which makes this piece all the more impressive. Jim agreed to answer some questions about himself, the mosaic and the building process. Let him know what you think in the comments! 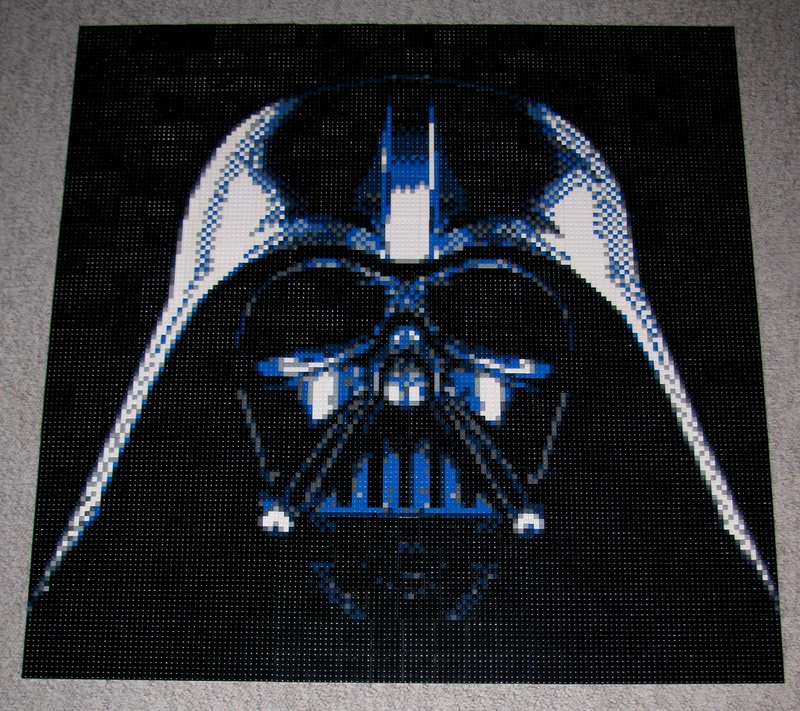 TBB – Why did you decide to do a LEGO mosaic?
JJ – By training, I am a molecular biologist, specializing in disease and metabolism, and I teach advanced biology and chemistry. I work in a school that has both an advanced art program and a well-equipped woodshop. Art is strictly a hobby for me (one I sadly have little time for), but thankfully I have several friends at my workplace who are skilled artists and craftspeople by trade or training. My mind is extremely analytical (part of the reason I have loved Lego since I was a child), and I think that is reflected in my art. In many ways then, there was a confluence of factors that made even the consideration of Lego mosaic a viable possibility.

I conceived of this project as a Lego mosaic back in the summer of 2012, which is long enough ago that I cannot honestly remember its genesis as an idea. At some point, I had a photograph of Darth Vader, and I thought, given the fairly limited number of common Lego colours, that I could at the very least plan to build it as a Lego mosaic. I had seen a couple of Lego mosaics before, in Nathan Sawaya’s online gallery, who, at the time, was the only Lego artist I was familiar with, so I knew it was possible. So I sat down at the computer and started making the digital picture without really having a realistic plan of how to transform digital into physical. In fact, more than a year passed between the time that I finished the actual picture/plan and when I started building.

TBB – Why Darth Vadar?
JJ – I am a Star Wars fan and a Lego fan. I have collected almost every Lego UCS Star Wars set, and Darth Vader was always my favourite character. As a matter of preference, it had to be him. As a matter of practicality, the fact that any picture of Darth Vader has a limited colour palette made it ideal for the project.

TBB – Do you have plans to do more mosaics?
JJ – I would like to build more mosaics. Another one of my favourite franchises is Halo, and like Darth Vader, the Master Chief has an iconic helmet. I am currently in the planning stage of this one. I have a picture, and I am currently hand pixelating it, in much the same way I did for the Vader mosaic.

TBB – What was the hardest obstacle you faced in completing this project?
JJ – I faced several hurdles to building the mosaic at several stages, but I will describe two.

Firstly, I had no idea if there was “an easy way” to pixelate the original photograph. In the end, I settled on Microsoft Excel, which is a spreadsheeting program. I resized the columns to create a grid of square cells, and then I used the “fill” option to colourize each cell. I thought, at the time, that having an “address” (A1, A2, B1, B2, etc.) for every cell might be useful if I had to divide the project into smaller parts. In the end, I didn’t need the addresses, although there were other advantages that I gained later by my use of Excel that I hadn’t anticipated. The difficulty was that using this methodology meant pixelating the Darth Vader photograph by eye, and that required quite a lot of trial and error until I started to understand the patterns/techniques that I was consistently using to achieve shading. I have since learned that the term to describe this is called “dithering”. Let me tell you, dithering by eye is a painful, painful process.

The second major hurdle was cost. The original picture in MS Excel was 120×150 pixels, 18000 in all, though the picture was eventually resized to 144×144 for building just due the sizes of available
baseplates. Given that I am familiar with programming in Excel, I was able to use it to count the number of cells of each colour (unintended benefit), but I also knew that 1×1 Lego plates cost $0.10 each. Though I know that I can get pieces cheaper second-hand, such as through Bricklink, that was time I didn’t want to spend. So I was looking at an $1800 bill. At that point, I thought of using plates larger than 1×1 because I could tell that larger plates had a lower cost-per-unit-area (I even graphed cost versus area and found the optimal size to be in the 32-36 area range). So at the next stage, I made a list of available pieces of each colour and then hand-drew each piece into my Excel picture, and then counted each of them manually. It turned out to be 4122. While the picture took three days to make, hand drawing and counting the pieces took three weeks.

Even now, I don’t even know how professional brick artists like Mr. Sawaya or Mr. Shaddix plan their pieces. I suspect that there is probably a more sophisticated way that makes me look like a Lego Neanderthal pounding my mosaic into being with a giant bone club.

TBB – How many people have seen your Darth Mosaic? Has it been displayed publicly?
JJ – I can’t be sure how many people have seen the mosaic. First hand, I would say about a dozen. The mosaic is hanging on my wall in my home, and I don’t have many visitors. However, I do maintain a gallery of my art projects on my Facebook page, and through that medium many of my friends and colleagues have seen the work. I don’t think I would want to transport it around for show. The mosaic is mounted to 0.5” MDF and is far heavier than my weight tolerance for lifting.

TBB – What is the most memorable response you’ve gotten from someone seeing the piece for the first time?
JJ – I think in general, given that my friends and colleagues see Lego as children’s toys and not as an art medium, I enjoy the responses of shock that deal more with the fact that the picture is made of Lego rather than the fact that the picture itself is well made. Overall my favourite response came from my friend and colleague Shaune who helped me with all the aspects related to mounting the piece. She was incredibly enthusiastic and was overjoyed to see the final product on the wall. Shaune is an artist, and a very accomplished one, so her opinion on such matters carries a lot of weight for me.

TBB – Where is this mosaic going to end up? Are you keeping it, selling it, tearing it apart?
JJ – This mosaic will stay on my wall until such time as I move, and then professional movers (or other people who are stronger than I am) will relocate it to a different wall in another house. I wouldn’t sell it (I never sell my art) nor would I ever take it apart. As I am not a professional artist, I don’t have a studio or gallery shows or any real public forum to display my work, and I suppose for that reason the thought has never occurred to me. I suppose this mosaic will become one of those curios that few people ever get to see.

TBB – You mentioned Dave Shaddix. Tell our readers what part he played in this.
JJ – I built the mosaic on nine separate 48×48 baseplates. In my planning that I described in question 4, I had made sure that no pieces ever overlapped from one plate to another. I could foresee this problem right from the start, but eventually I finished all nine plates and had no real practical knowledge of how I should go about mounting them. One day, while randomly hopping from page to page on the internet, I came across a gorgeous Lego mosaic of Kaylee Frye from the television show Firefly. The artist was Dave Shaddix. So I sent Dave a message asking him how he mounts his works, and he suggested the medium-density fibreboard and glue. Without Dave, those nine plates might still be sitting in a pile in my Lego room.

TBB – What is next for you?
JJ – Well, as I stated in question #3, I would like to eventually do a mosaic of Master Chief from the Halo series, although I think 96×96 (as opposed to 144×144) would be plenty big. Unfortunately, due to the nature of my job, another project may not come to fruition until the next round of summer holidays swings around.