In the last week or so, new pictures by James Pegrum (peggyjb) kept popping up in my contacts’ latest photos, offering tantalising glimpses of an amazing Castle model coming together. James has now posted a picture that shows just about the whole thing, although he couldn’t quite capture all of it without doing some major remodelling of his house. The castle is not based on any particular real one, but that doesn’t mean it doesn’t look realistic. 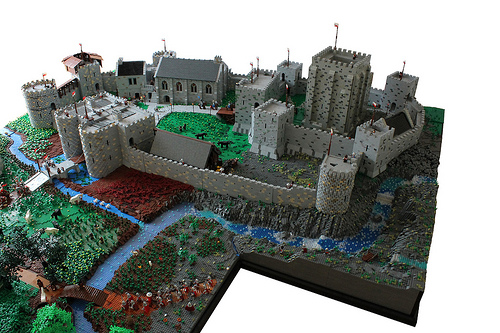 Admittedly, I’m not a connoisseur of Castle models, but this one strikes me as really rather good, for a couple of reasons. My fellow brother Gambort once explained that, to be good, a LEGO city should ideally not all be built on the same level or on a rectangular grid, except perhaps if it’s meant to be somewhere in a particularly flat part of the United States (I am paraphrasing a bit and this latter part is my own addition, but it is a nice bridge to the next sentence). There are no castles in the United States, except for generally cheesy-looking fakes, and I reckon that LEGO castles too get better by not being rectangular and level. James’ model ticks both of those boxes.

This is as good as it gets for now. However, it will still get better. This is merely James’ contribution to a collaboration with seven other members of the Brickish association. Their complete layout will be unveiled at the 2013 Great Western LEGO show, which will take place on the 5th and 6th of October in Swindon, and I am very much looking forward to seeing it with my own two eyes.