Harley Davidson is still going strong, but in the sixties competition by Japanese motorcycle manufacturers almost drove them out of business. Japanese bikes, such as this Kawasaki Vulcan modeled by LegoMarat, don’t have the same ‘swag’ as hogs, but there’s something to be said for a bike that works every time you start it and that doesn’t make your teeth rattle when idling (or so I’ve been told). Irrespective of whether you like Japanese bikes or not, this one does make for a very nice model. 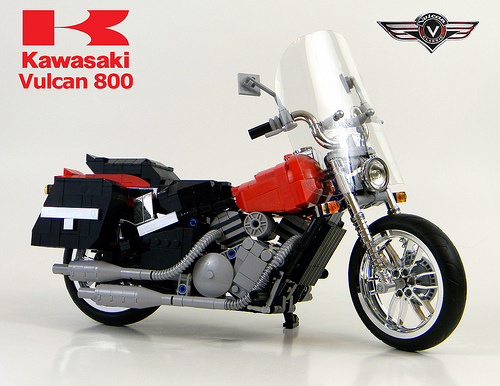 When I first saw it, I wasn’t quite sure I was looking at LEGO. Part of that is due to the windscreen, which indeed isn’t LEGO, but it’s also because of the nice amount of chrome, clever combination of parts for the headlight and just the right level of detail.