I have a confession to make, constant reader, I’m a huge fan of Stephen King; the booze years, the coke years and even the post-accident years (for the most part). One of my guilty pleasures from the coked-out 1980’s was the cinematic gem Maximum Overdrive, directed by the author himself and starring the incomparable Emilio Estevez. The plot is brilliant in it’s simplicity: a handful of strangers find themselves trapped together in a truck stop diner after semi-trailers and other large vehicles are suddenly brought to independent life by an unknown force and proceed to gruesomely kill every human in sight. As anyone who has ever had the great fortune of seeing the King-directed horror flick will tell you, the real star of the show is the Happy Toyz Co. White-Western Star 4800 truck which has the face of the Green Goblin from Spider-Man mounted on its grill. It is without a doubt one of the coolest semi’s of all time and now it is immortalized in LEGO by -derjoe-, who did a wonderful job on both the Goblin-grill and the letters. 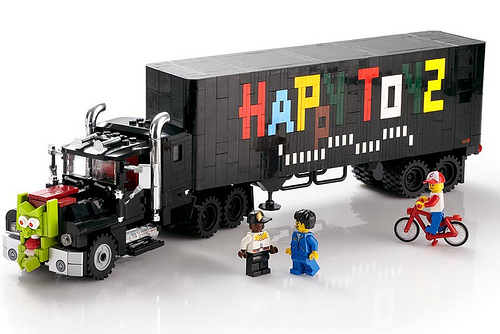