Measured by its longevity and popularity, the Cessna 172 Skyhawk is the most successful mass-produced light aircraft in history. The 1960 model 172a faithfully reproduced here by Jes Bert introduced a swept back tail and rudder as well as float fittings to the design, the price was US $9,450. 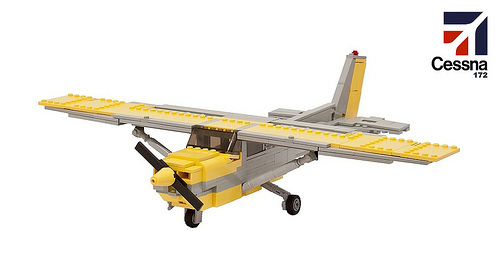 In brushing up on my Cessna 172 lore for this posting I was reminded that on May 28, 1987, a rented Cessna 172 was used by German teenage pilot Mathias Rust to fly an unauthorized flight from Helsinki-Malmi Airport through Soviet airspace to land near Red Square in Moscow, all without being intercepted by Soviet air defense. Who says teenagers aren’t motivated?