Way back in the eighties, I bought a book about Soviet combat aircraft that contained two grainy photographs of the Soviet Union’s latest air-superiority fighter: the Su-27, which received the NATO code-name Flanker. At the time, this was very exciting, because the Cold War hadn’t ended yet and very little was known about this fascinating aircraft. That changed only a few years later, when the Berlin Wall fell, the Soviet Union collapsed and the Cold War ended. Russian aircraft manufacturers could no longer rely on large orders from the Soviet Air Force and started offering their most advanced fighters, including the Flanker, to foreign customers. Because of this, an ever growing collection of different versions of the Flanker was regularly displayed at airshows all over the world, often in oddball camouflage schemes and performing jaw-dropping maneuvers. 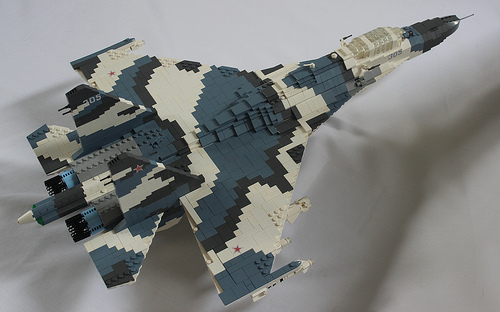 Everblack, whose F-15 Strike Eagle was featured here earlier this year, has now built a nicely shaped scale model of one of the latest versions on offer, the Su-27SKM. It is a multi-role version of the basic single-seat fighter, intended for export customers. The particular jet he modeled is the demo aircraft used by the manufacturer. It carries an interesting combination of air-to-air and air-to-surface missiles, which is used at airshows to demonstrate the aircraft’s versatility. My favorite feature is the camouflage, which is a faithful reproduction of the white, grey and black color scheme of the demonstrator.