Some of the great models that were on display at Brickfair Virginia have already been blogged here in the last few days. I haven’t posted much of anything recently myself, because I’ve been taking a vacation in the US and have been traveling around since before Brickfair. However, today I have a little time to share some of my favorites from the show. Since the models I took to the event were in the military theme, the military tables were more or less my home for the duration of the show and I’ll highlight some of the builds there for now.

The guys I hung out with the most, Matt Hacker, Evan Melick (Legosim), Corvin Stichert and Aleksander Stein, built a collection of military vehicles, mostly based on existing vehicles, with a few fictional near-future vehicles thrown in for good measure. The quantity was impressive, but it was the quality that impressed me the most. Almost all of the vehicles have working features, such as opening doors and hatches or suspension. Even though they were built by four different people, they all seemed to fit very well together.

As good as these were, the award for best military vehicle went to the M1070 Heavy Equipment Transporter built by Christopher Jenkins (Jenkballs), which is well deserved as far as I am concerned. I saw this model a few months ago and liked it then, although the photo wasn’t all that great. Seeing the vehicle with my own two eyes makes all the difference, however. 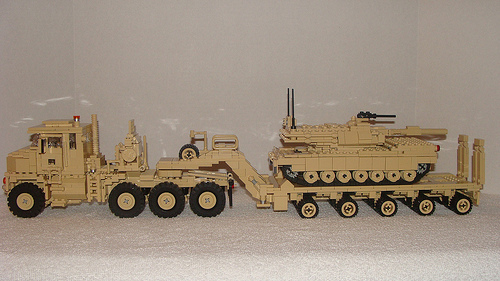 The M1070 is the standard heavy hauler for the US military and is used to transport M1 Abrams tanks, for instance. It is not the most common choice of subject, but I like trucks and have long been thinking about building one myself. This model is superbly done, with every detail painstakingly built out of tan elements.

Also on display was a collection of models from the Battle of Gettysburg. This famous Civil War battle took place 150 years ago this year. The ‘Defense of Little Round Top’ diorama, by Gary Brooks (Gary the Procrastinator), won the award in the ‘Best Historic’ category. 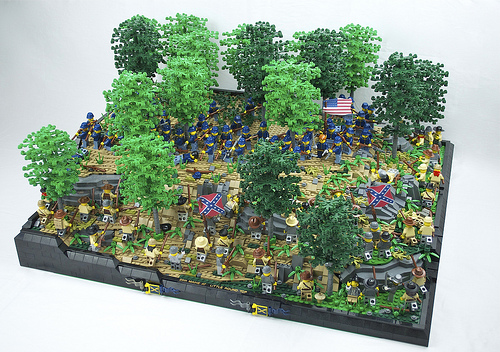 Little Round Top is a rocky hill South of Gettysburg. A counterattack by the defending 20th Maine Regiment against Confederate troops was a pivotal moment in the battle. There is nothing I don’t like about this diorama. It’s the sort of model where you keep noticing new things as you turn around it. The landscaping is fantastic. The hill looks muddy and slippery somehow and that is no small feat.

These were just some of the highlights at the show for me. I spent a lot of time meeting other builders and looking at their models. I still have dozens of photographs to go through and will highlight some of the other models that I saw in the next few weeks.