Yesterday, the BBC announced who’ll be playing the Twelfth Doctor. While I’ve appreciated both David Tennant and Matt Smith, I’m looking forward to seeing what Steven Moffatt and team will do with an older Doctor. And as amusing as the olive-drab Daleks were in the service of Churchill during World War II, I didn’t really like the primary-color Daleks introduced in the same “Victory of the Daleks” storyline. Perhaps we’ll also see a return to some of the classic villain designs from earlier series.

Speaking of older Doctors and more-classic Daleks, though, Steve (LegoAvon) has built a trio of menacing Daleks in the classic dark gray of the 1970’s. 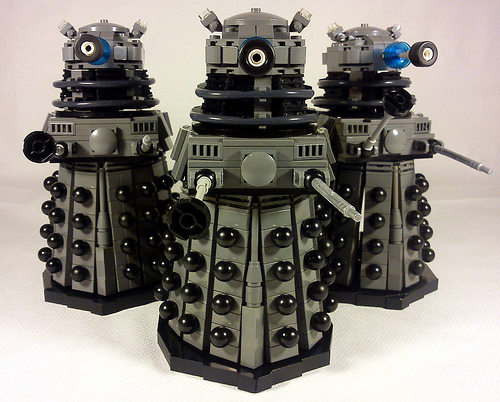