Thanks to having run out of LEGO track (I can’t wait for Brickmania Track Links), I’ve been forced to build something with wheels. Between June 1941 and September 1945, the United States delivered 400,000 Jeeps and trucks, 12,000 armored vehicles, 11,400 aircraft, and 1.75 million tons of food to the Soviet Union as part of the Lend-Lease Program. The US often reserved the latest arms and armor for its own armed forces, and older or obsolete designs ended up on ships to the USSR to fight the Third Reich on the Eastern Front.

One such vehicle was the M3 Scout Car, an armored car created by the White Motor Company in the late 1930s. You can clearly see the M3 Scout Car’s heritage in the later M3 Halftrack, which I’ve included here with the Scout Car — both in Soviet livery. 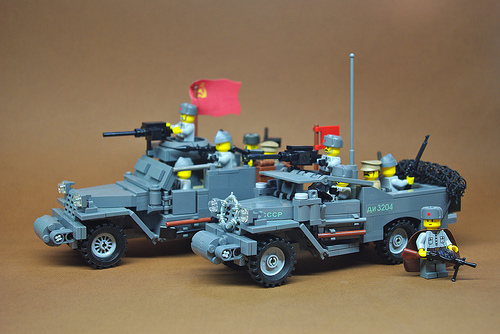 Recent posts about my LEGO World War II models didn’t really discuss materials or building techniques. While I wholeheartedly agree with LEGO’s stance not to produce LEGO sets based on recent real-world military conflicts, it does leave a gap for the minifig-scale LEGO military modeler. Several custom accessory vendors fill that gap. Here’s a quick run-down of the custom items I’ve used in my recent models. 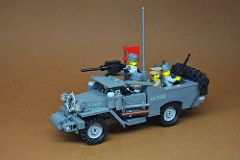 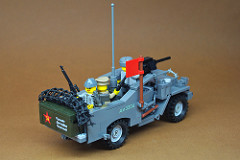 The Soviet decals — “CCCP” and so on — are stickers salvaged from Indiana Jones and the Kingdom of the Crystal Skull LEGO sets (a theme rife with exceptions to LEGO’s policy, but full of elements useful to the military builder).

I’ve written before about how much I enjoy research while building LEGO models based on historical people, events, places, and vehicles. Though I haven’t posted anything in a few weeks, I’ve continued improving many of my existing WW2 models based on feedback from other builders and better photos I’ve come across.

Once I’m reasonably happy with a military model, I like to reproduce it so I can make further variations without destroying each one in turn. Here’s my much-improved (I think…) M5 Stuart Light Tank alongside a new M4 Sherman Medium Tank. 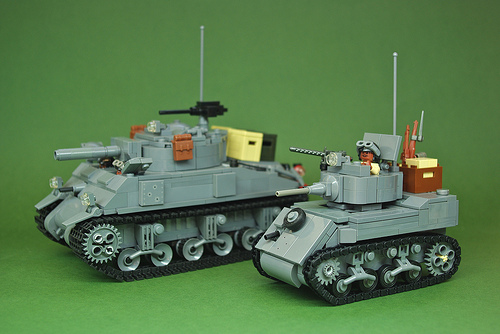 I rebuilt the front of the Stuart to reduce how much it projected in front of the treads, lowered the turret by a plate, and gave the turret a proper commander’s hatch. The Sherman has a brand new turret, using 1×3 arches that I first saw built into the turret on the Brickmania Sherman I reviewed earlier this year — another example of how LEGO builders are indebted to each other to improve their designs.

I’m still not sure what I’m going to do with all my World War II armor (LEGO Italy circa 1943 seems overdue for liberation), but I’m certainly enjoying the vehicle builds along the way.