When first introduced, the DeLorean DMC-12 looked as though it came from the future. In reality, however, it turned out to be a disappointment. Its stainless steel body was impossible to keep clean, its fancy gull-wing doors leaked, its electronics were unreliable, the build quality was shoddy and its performance was lacklustre. It is no surprise then that DeLorean Motor Company went bust after a few years. Nonetheless, the Back to the Future Trilogy turned this sleek but hopeless clunker into a pop culture icon. In the words of Doc Emmett Brown: “The way I see it, if you’re gonna build a time machine into a car, why not do it with some style?”

Back to the Future is a popular subject for LEGO builders, and we’ve featured a fair number of Back to the Future models here on The Brothers Brick. Now, thanks to LEGO CUUSOO, LEGO is getting in on the action too, with an official BTTF DeLorean scheduled for release soon. Like many of you, I’ve seen some of the preliminary pictures, and though I quite liked the original version on CUUSOO, I though it looked rather over-sized with the figures standing next to it. The size was chosen such that it could seat two minifigures side-by-side in a vehicle.

Since I am currently building cars from Eighties movies and TV shows anyway, seeing the preliminary picture of the set prompted me to have a go at building one myself. Since minifigures are oddly proportioned little characters and play value isn’t my priority, I decided not to bother with them, opting for a brick-built figure instead. I chose the flying version of the car that is introduced at the end of the first movie and was used during Part II. 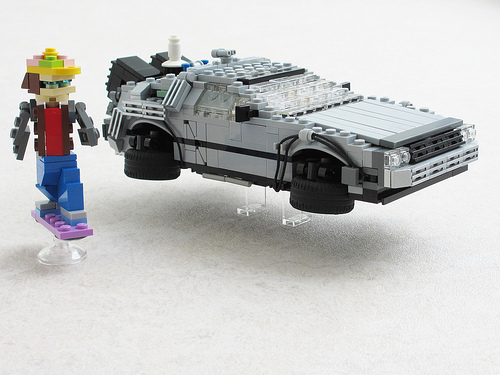 I am not the only builder who was prompted to build a DeLorean by pictures of the forthcoming set — Larry Lars has finished his own. It is a rather different interpretation of this movie classic, but it looks the business. The model is slightly smaller than mine, which makes it about the same size as the CUUSOO version. In Larry’s words, it’s all about shapes and not so much about the details. He didn’t skimp on the details, though. 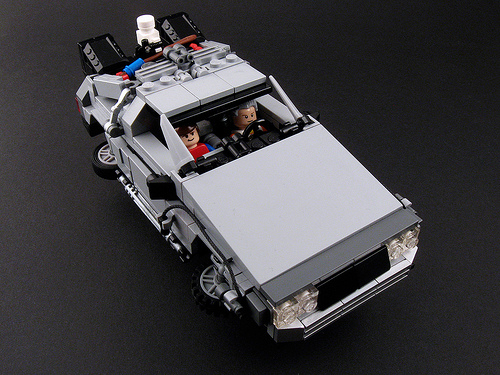 Larry and I realise that we don’t have to work with the same constraints as LEGO set designers. Our models would not work as a set; they use far too many parts, are too complicated and use a few illegal connections. Furthermore, mine doesn’t drive very well and the doors are very flimsy. I suspect this isn’t different for Larry’s model either. Inevitably, there’s something lost in translation between fan-designed models like ours and an official set. I’ll await definitive pictures of the set before making up my mind, but I hope LEGO haven’t turned a sleek design into a clunker.

Check back soon here on The Brothers Brick for coverage and a review of the official LEGO Back to the Future DeLorean.