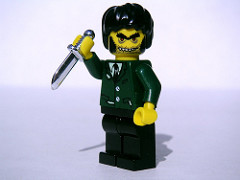 We’ve been studiously ignoring the rather ridiculous press coverage of a study published last month in the Proceedings of the 1st International Conference on Human-Agent Interaction. The study itself is simply a numerical analysis of minifig facial expressions from 1975 to 2010, concluding that facial expressions perceived by adults as “happy” have decreased over time in favor of “angry” faces and other emotions. It’s actually a rather interesting study, if you bother to read it.

But the media frenzy surrounding the study has been silly at best and consistently inaccurate — not necessarily about the trend toward more variety in minifig facial expressions but about the substance and conclusions of the study. One of the more moronic trends among the articles — or at least their headlines, which many people probably don’t read past — is claiming that the study says that the greater diversity in minifigure facial expressions is somehow harmful to children.

Conan O’Brian did a bit last night that is representative of the misunderstanding many people have about the issue. While Conan and his writers put the material to good comedic use, it reminded me that we might still want to post something about the study and the press coverage surrounding it. The story just doesn’t want to die!

Thankfully, not all the coverage is as idiotic as what you’ve probably seen on your local news. Scientific American editorial intern Arielle Duhaime-Ross has written an excellent blog post about the study and its media coverage, with insights into why people have been so attracted to the story.

She quotes one of the New Zealand researches as saying, “Our little LEGO study was never intended to give scientific evidence of the minifigures’ harmful effects — it cannot even give a hint.” Christoph Bartneck continues, “The media fights for our attention and one mechanism they use is to invoke fear.”

It’s this fear-mongering that I find so distasteful (and consistent with the controversy surrounding LEGO Friends). I’m no defender of the LEGO brand or corporation, nor do I always agree with the decisions they make — I’ve been advocating for more ethnic and gender diversity in minifigs for years, in fact — but I do take issue with bad journalism.

Head on over to ScientificAmerican.com to read Arielle’s post, and let us know what you think yourself in the comments.