New Guy (or gal) Saturday rolls down the mighty Mississippi river with JBIronWorks, who provides today’s exploration into American military history with his interpretation of a Civil War era warship. According to the builder:

The Queen of the West was a side wheel steamboat launched in 1854 for service on the Mississippi river and its offshoots. In 1861, she was bought by Colonel Charles Ellet Jr., along with eight other vessels, and was converted into a fleet of rams, ordered by the War Department. Sent into service in early 1862, they served in many engagements, including The Battle of Memphis, where Ellet was mortally wounded aboard the Queen, his flagship. 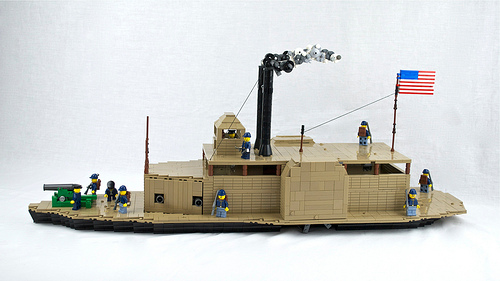