The boys over at LCC (Lands of Classic Castle) are trying to separate the wheat from the chaff as voting is in full-swing for their 4th Global Challenge. The contest is down to the final 4, some of which may seem familiar to constant readers of TBB. 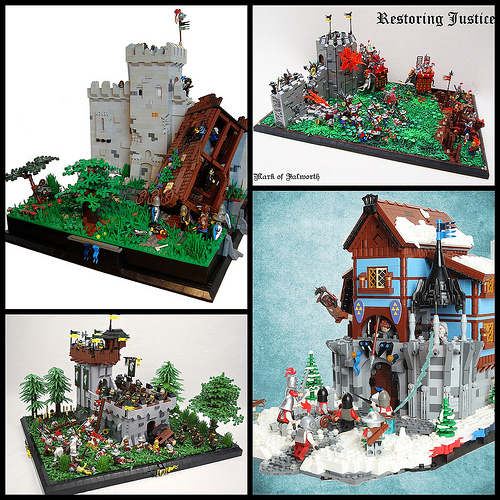 Lands of Classic Castle is a MOC-based fantasy world called Roawia which is populated by the members of the Classic Castle forums. The world is broken up into four factions: Garheim in the arctic north, Lenfald in the forests of the northwest, Loreos in the central desert and grasslands, and the Outlaws who are scattered throughout the land, but are more concentrated in the southern mountains and swamps.

Each participant creates a character who will represent them in the game. This character can be anyone; a merchant, a power-hungry baron, or a simple farmer. Once you’ve decided on your in-game persona, you can build MOCs that help to tell his/her story. You can also build MOCs that will help increase your status in the kingdom as well as your faction’s standing. This occurs through various contests, challenges, guild builds and free builds.

Apart from the fat envelope full of cash, the reason I’m excited about pimping this enterprise is because the boys over at Classic Castle (Mark of Falworth and AK Brickster) have managed to inspire and motivate over 160 people to sign up for the LCC project, many of whom were long-time lurkers on the CC forums before being lured out of the shadows to join in the fun. I think that kind of effort should be rewarded. If you’re a member of Classic Castle, it’s time to vote!