For a long time, the T-72 was the Soviet Union’s main battle tank and it was widely exported, basically to whoever could afford it, including wonderful holiday destinations such as Iraq and Syria. The T-72AV, which is the version modelled by Chris Lee(Babalas Shipyards), is an upgraded version fitted with explosive reactive armour to defeat shaped charges. 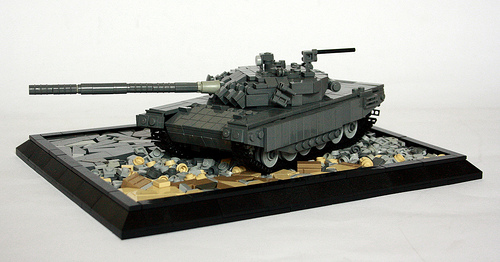 You can’t hold the base upside-down without bits falling off, which may not be to everyone’s liking, but I like the effect. Iraqi T-72 units got comprehensively clobbered in the Gulf War of 1991 and the invasion of Iraq in 2003 at the hands of American tankers and British tankers, with their far superior M1 Abrams and Challenger II tanks, but this model is a winner in my book.