After reviewing the Brickmania M4 Sherman and WC54 Ambulance custom LEGO kits last week, I’m going in a bit of a different direction by reviewing something I haven’t managed to build myself — the M2A4 Light Tank in United States Marine Corps livery.

For comparison, here’s Dan Siskind’s M2A4 Light Tank next to the M4 Sherman I reviewed last week, with a Citizen Brick Marine for scale: 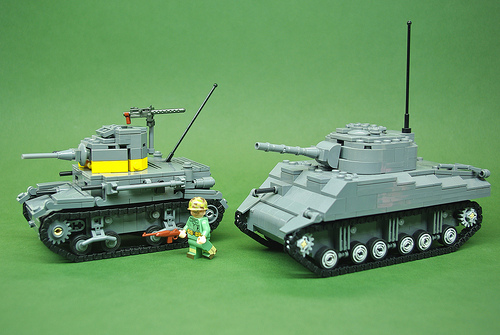 The M2 Light Tank was produced in limited numbers in the years leading up to World War II — only 375 left the assembly line — and they only saw combat on Guadalcanal, with the US Marines. Nevertheless, the tank was an important evolutionary step along the way to the subsequent M3 “Stuart” (photo below) and M5 light tanks. (The M2 Light Tank never entered British/Commonwealth service during WW2, and thus didn’t get a nickname like the Stuart, Lee, Sherman, Chaffee, and so on. It was only later that the US military formally adopted the British convention for naming US tanks after American generals.) For me, though, I love the M2/M3/M5 tanks because they’re so small. Modern main battle tanks like the M1 Abrams or Challenger 2 are like battleships on land, with low profiles that give them a distinctly sinister look. We drove past Fort Lewis on our way from Seattle to Portland recently, and I pointed out an M2/M3/M5 sitting on a plinth near the highway to my wife. “Oh, what a tiny tank! It’s adorable!” she exclaimed.

My sentiments exactly. Yes, the M2 and its immediate descendants were machines of death and destruction no less so than a Merkava or Leopard, but they are just a teensy bit more twee. (The adorably tiny light tank has also influenced popular culture, in games like Advance Wars and movies like Tank Girl.)

So, the M2 Light Tank would seem like a perfect fit with LEGO. I tried building an M3 Stuart a couple years ago, but I failed miserably (though I still have my tablescraps in a little plastic bag). Thankfully, Dan Siskind has managed to fit nearly every detail of the M2 into his custom LEGO kit, at a scale that fits neatly on my 1/35th schematics for the M2 Light Tank in World War II AFV Plans: American Armored Fighting Vehicles.

(Still slightly too tall, but I give LEGO tanks a pass for that at this point.)

The Brickmania M2 Light Tank includes a rotating turret with a gun that can move up and down, proper bogies and road wheels, a BrickArms M1919 machine gun, nicely angled glacis armor plating at the front, and even rear engine doors that open and close.

The single-chain tracks work very well for a smaller tank like this, and enable Dan to keep the tank’s height manageable without losing too much detail. The suspension is interesting because Dan has built the first layer of the tank’s body using 1x plates rather than a larger plate, allowing him to attach 2×2 plates with Technic pin holes to the underside using their hollow studs. This creates a half-stud offset that gives the road wheels the correct spacing — definitely something I would never have thought to do.

The angled antenna gives the tank a jaunty look, and deserves a brief discussion on its own. Internally, Dan achieves the angled antenna by inserting a clip/claw into a 1×2 brick with a Technic pin (and then clipping on a telescope for the antenna to attach to). The clip inside the 1×2 brick’s Technic pin is, of course, an “illegal” connection. Apparently, there are actually two different molds for the 1×2 brick element — one with a fairly open Technic pin, and another with much thicker walls on the pin, preventing you from fitting anything inside the pin. Because BrickLink doesn’t distinguish between these two very different parts and Dan sources all the parts for his kits on the secondary market (like all adult builders and purveyors of custom kits), my kit happened to include a brick that wouldn’t accept the clip piece.

I contacted Dan about my problem, we identified the cause, and he promptly shipped out a “service pack” with the correct part. I bring up this minor issue in my review for two reasons. First, I just think it’s really interesting what kinds of challenges a custom kit maker has in assembling their kits in quantity. Second, I was impressed by Dan’s customer service. And it’s not just because he knew I was reviewing his kits for TBB — it’s something I experienced years back when I picked up a couple older kits to review (though my actual review was extremely brief), and when I’ve bought smaller items through his store over the years. Like Will Chapman of BrickArms, Dan is just a plain good guy, and it’s clear that that comes through in his interactions with fellow builders and with customers.

At 473 LEGO elements, this is a surprisingly substantial set for such a small tank — the completed model has a nice heft to it worthy of the name “tank.” It’s also sturdy enough for play, and fits nicely in my hand compared to larger models. If tanks could be swooshed, the Brickmania M2A4 is definitely swooshable. (What’s the non-flying equivalent of “swooshable”? “Zoomable?”) At $150, the price is comparable to other custom kits on the market.

Overall, Dan’s M2A4 may just be my favorite Brickmania kit yet. Going small can be substantially harder than going big, and Dan has pulled it off wonderfully. Ultimately, though, my positive experience with the Brickmania M2A4 Light Tank was influenced as much by great problem-solving and customer service as by the excellent design of the model itself.