This is my second review focusing on a custom Brickmania LEGO kit that’s similar to a LEGO model I designed myself — well, sort of, in this case. Read on…

The M4 Sherman is one of the most iconic and recognizable tanks of all time, with nearly 50,000 produced between 1942 and 1955. Because of its long production run, the tank served through most of the U.S. involvement in World War II and on through the Korean War.

The Sherman is an incredibly well-documented vehicle, and popular enough with plastic modelers that there’s a wealth of reference pictures available online and in books, from historical photos to detailed schematics and high-res close-ups of surviving tanks in museums. With so many production variants (animated GIF illustrating three of the most common ones on the right) and tank crews’ penchant for customizing their vehicles in the field, it’s also a great choice as inspiration for a LEGO model — you can definitely put your own spin on it.

After I’d tried my hand with LEGO World War II models with a couple of small Jeeps and a simple Higgins Boat for my Omaha Beach diorama, I knew I had to tackle a bigger vehicle, and I quickly settled on the M4A3 Sherman, which I included in my diorama depicting the liberation of Cherbourg.

Here’s my M4A3 (76)W Sherman variant on the right with Dan Siskind’s Brickmania M4 Sherman that I’ll be reviewing on the left. 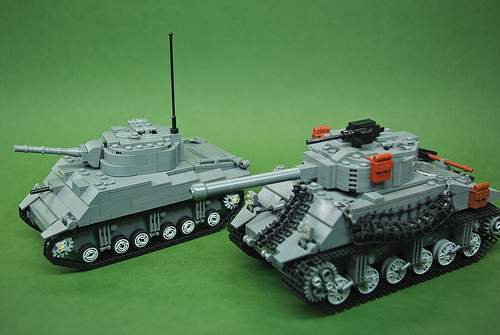 It feels a little odd reviewing these two models as a comparison for two reasons. First, they’re very different variants. Dan’s M4 reflects earlier (initial M4 or M4A1), much more rounded hull design with a 75mm gun while mine is the mid/late-war M4A3 with an angular hull and the much-larger 76mm gun (with its correspondingly longer turret).

Side note: Remember how I said just how well-documented Shermans are? Prepare for this review to get occasionally technical about tank details. Bogies will be mentioned.

Second, I have to confess that I based many aspects of my M4A3 on Dan’s own M4A2. Or rather, I tried to reverse-engineer things like the front section and the suspension from his pictures (which I can’t find online today). You can definitely see the influence in details like the angled flags above the treads on the front. Given a bit of “shared DNA,” there is of course a lot more similarity between my M4A3(76)W and Dan’s current Brickmania M4A3(76)W kit. But back to the actual review…

Theoretically, both of these models are the same scale — Dan says he targets 1/35th, and that’s the same scale I used, based on schematics in World War II AFV Plans: American Armored Fighting Vehicles.

But this next comparison photo shows how much larger mine is: 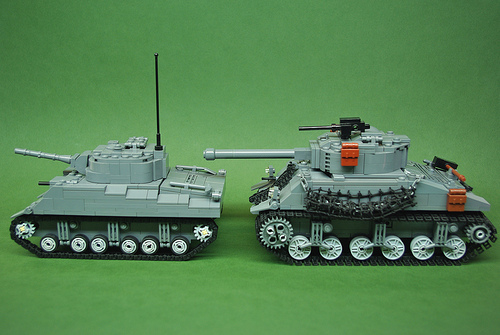 The problem with LEGO tanks is that they’re just plain huge — an issue I touched on in my review of the Brickmania WC54 ambulance: “The more ‘room’ you have to work with, the more details and functionality you can build into the model.” (Speaking of ridiculously huge, I hate the road wheels on my tank and will definitely be replacing them with smaller ones if/when I revisit my design.)

My point about tank scale is best illustrated by this historic photo from Belgium in 1944, with soldiers conveniently walking alongside for scale: The soldiers standing next to the Sherman show that the top of the tank treads come no higher than mid-chest, and the deck of the tank where the turret sits is just above the tallest soldier’s helmet. Granting that the minifig is horrible for scale, but assuming that height is an acceptable measure of dimension, it’s clear that just about every LEGO tank is far, far too tall. And thanks to the minifig’s impossibly wide hips, a LEGO Sherman’s width is also affected, if you want to include space for both a driver and a machine-gunner. Here’s Dan’s photo of his M4 Sherman, with three crewmen (not included in the set): 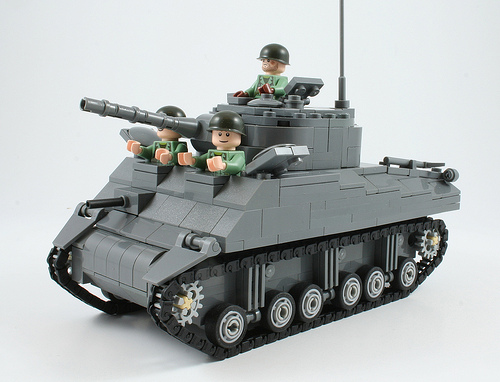 On my tank, the tread/suspension section is taller than a minifig. Dan has managed to shave at least two plates’ worth of height off the most-common LEGO Sherman designs, but at the expense of several details most other LEGO versions include, like the larger front drive sprocket compared to the smaller rear idler, and even the bogies (hey I warned you!).

The difference — both between Dan’s two Shermans and between his $165 version and my own — is a matter of scale versus detail. I think this more-basic Brickmania Sherman gets the scale closer to “right,” but by sacrificing many of the details in my version and Dan’s own M4A3. It’s not just an issue of price; I think it’s essentially the same tradeoff between scale and detail that Dan and I made in the opposite direction with our two rather different ambulance designs.

The scale-vs-detail point that I’ve belabored now in two separate posts isn’t a criticism in either direction — neither “Proper scale should always win over detail” nor “Certain details must never be left out.” And I won’t include a handy comparison table this time. I do want to point out several aspects of Dan’s “basic” M4 Sherman that I really like — all differences from mine.

Even without some key details — like the bogies (and again!) — I really like the overall design, and this feels like a Sherman you could probably build a couple more of once you have your first copy, thanks to Dan’s instructions. Other than the bogies (last time, I promise), my biggest critique is the too-narrow treads — a single set of Technic chain links for each tread. Most Sherman designs use either LEGO’s wider tank treads or two parallel chains of Technic links. The single-chain treads work on smaller tanks (I’ll review one of them shortly), but as part of the overall shape, I can be convinced that it’s an acceptable compromise.

And for me, that’s ultimately why this is a positive review — that the design looks great at a lower price by leaving off a few details — and why I can heartily recommend the “plain” Brickmania M4 Sherman. It’s a fun little tank — and little is good when it comes to tanks. More importantly, it holds plenty of opportunity to make it your own with extra details and “field customizations” like hedge-cutters, applique armor, and equipment built from your own LEGO collection.

With enough M4 Shermans at your disposal, successful invasion of a Pacific island becomes a possibility: 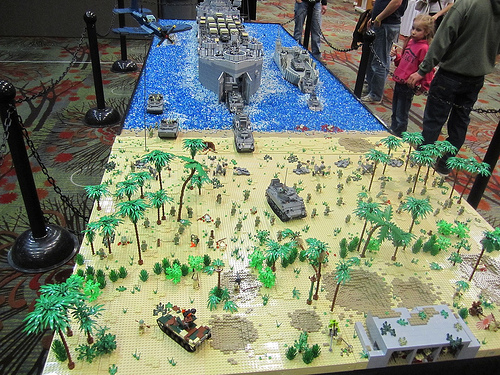 Brickmania sent The Brothers Brick a copy of this set for review. There is no guarantee of coverage or a positive review by providing items to review. It helps when you have a good product, like Dan Siskind does with his Brickmania custom LEGO kits. We’ll have a couple more reviews next week.