Dan Siskind of Brickmania and I recently decided that it might be interesting to review a few of his custom LEGO kits from the perspective of someone who’s designed their own version of the same iconic vehicles available in his store. Prepare for a series of reviews with a bit more personal focus than your average LEGO set review…

The Dodge WC54 was an ambulance used by the US Army throughout World War II, and for a few years afterward. You can see them lined up on the beach at Normandy and it features prominently in the TV show M*A*S*H. It’s a wonderful vehicle, with rounded corners and a beautiful purpose — bringing safety and hope in the midst of the horror and chaos of war. My late grandfather trained as a medic during World War II, and I can imagine that if he had been deployed to the invasion of Japan (thankfully, he wasn’t) he would have served in a Dodge WC54.

All of that is why I had to build one myself. After a couple iterations and some great feedback from Tim, I was pretty pleased with the results. It’s small, but it’s one of the models I’m proudest of, so I thought I’d first try the Brickmania WC54 Ambulance custom kit for my first comparative review. 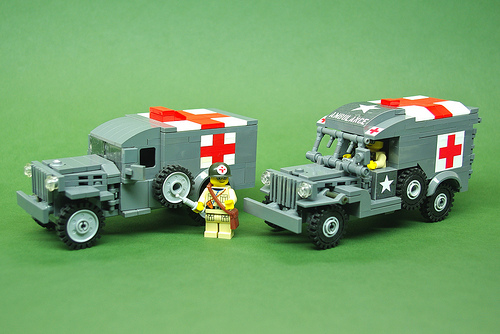 Dan sells two versions of his WC54 design — a standard version with just the vehicle for $80 and a “bonus pack” version for $125 (which Dan was kind enough to send us). The bonus pack version includes a Citizen Brick US Army Ranger, printed BrickArms medic helmet to turn the ranger into a medic, a “Brickmania Medical Corps” T-shirt, and the whole thing comes in an olive drab medic satchel. The complete package is actually kind of awesome, even to this jaded, cynical reviewer.

The model itself includes 253 LEGO pieces. So, let’s just get this out of the way in our first review: $80 for 253 parts? These sets aren’t for someone building their collection of LEGO parts. I asked Dan about the prices of his custom LEGO kits, and he reminded me that he has to source his individual LEGO parts on the secondary market just like everyone else. Dan sells his custom kits in limited runs of fifty to a hundred (rather than the tens or hundreds of thousands of units that the LEGO Group moves), and his price has to account for the time he spends designing and redesigning the sets in a way that enables him to find enough parts in quantity to create a batch of custom kits. As someone who built a substantial portion of his World War II LEGO models from Bricklink orders, I can attest to the challenge of trying to assemble all the parts I need for a particular model from various BrickLink stores, much less attempting to source enough for dozens of the same model. No, custom Brickmania kits are not cheap, but I really do think you’re getting value for the money. Let’s move on…

The two main differences between my ambulance and Dan’s are in the overall size and the functionality. The Brickmania WC54 is one stud longer and two plates taller: 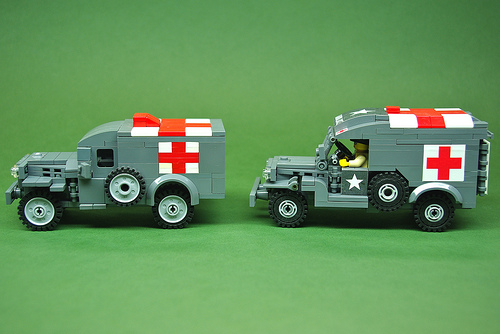 Because of the complicated SNOT and panel-style window on my cab, I have to remove a minifig’s arms and legs to put a driver in the cab. The half-stud offset transition from the six-wide rear to the five-wide cab means there’s no room in the back for much of anything. Plus, the rear doors don’t open, and ripping the roof off usually brings a bunch of other bricks with it. 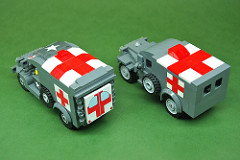 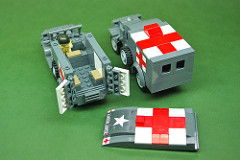 I could go on.

In other words, Dan gains all that extra functionality and detail at very little “cost” (one stud longer and two plates taller) in terms of the model’s slightly over-sized scale. Dan says the same is true of his Jeep:

I have also given up trying to make a decent 1/35 scale Jeep. I did one that small for a couple of months and couldn’t stand all the compromises to playability in order to make it that small. My newer jeeps are over-sized but way sturdier, cheaper and more fun to play with!

Dan’s version is also a lot sturdier than mine. Our front grilles are virtually identical — contrary to popular belief, there is indeed a finite number of ways you can achieve a particular design with the limited palette of available LEGO elements. But I built my three/five-wide engine block with its seven-wide fenders in a way that only left a single stud for the grille to attach to. Dan’s has a solid three-stud connection across the whole front of the engine block.

Despite all the odd-width construction and a few non-traditional building techniques (like tires inside of other tires to achieve a more-realistic look), Dan’s WC54 is an AFOL-designed model I’d be comfortable handing over to an eight-year-old to zoom around the living room floor. I can’t say the same of all the LEGO models I’ve handled — and a few I’ve accidentally broken — at LEGO conventions and club meetings.

You’ll notice in the pictures (both mine and the product pictures on Brickmania.com) that Dan’s WC54 has quite a few stickers. Well, they’re not actually stickers. Dan says he’s trying out something new with the WC54 — custom static-cling decals. I think it’s actually a brilliant idea: The decals go on easily and have continued to stick nicely even as I handle the model over and over during this review. Most interestingly, they come off when I want them to without leaving any gluey residue. But the decals feel a little like a work in progress. There are some spots on the larger gray decal (the one on top of the cab) that look like they didn’t print quite right. When I asked Dan about it, he said:

The static cling decals in the ambulance are a one-of-a-kind experiment to see how we like them. They’re printed on one of the laser printers in our office and not professionally made. Our customers are by and large our product testers too, so feedback like yours is what determines if we’re going to further pursue an idea or not. If clings are something we’re going to do for future kits, we’ll plan ahead to have them done in a professional shop where nicer result should be expected.

My vote is that these do definitely work — all the benefits of stickers without the mess. I only had one sticker that wasn’t quite perfect, so I’m looking forward to what Dan and his team can achieve with professional printing.

My other minor complaint is that the crosses on the side of the Brickmania WC54 aren’t brick-built. To be fair, they’re more perfectly square than mine and have a nice, thin white border around the cross that you can’t achieve nearly as well with just bricks. I asked Dan why he chose not to brick-build the crosses, and he said that the original prototype did include crosses entirely constructed from LEGO. But by using the decals he was already including, he was able to reduce the cost of the kit by several dollars, with 3 LEGO parts per cross rather than 14. Fair enough — not really a consideration for the lone LEGO model built from the bricks in one’s own collection.

Minor nit-picking aside, the Brickmania WC54 is a wonderful model built as much to play with as it is to include in your next World War II diorama or collaborative display. The slight compromise on scale has enabled Dan to achieve a level of sturdiness, functionality, and detail lacking in mine.

At $80 for the basic kit, you get a gorgeous little ambulance that might teach you a thing or two about odd-width vehicle building techniques. For another $45, the “bonus pack” version (at $125) also includes a lot of fun value. I think the “Brickmania Medical Corps” T-shirt is my new favorite LEGO-themed shirt, and the presentation with the medic satchel is priceless — the perfect gift for the LEGO military builder or World War II history buff in your life.

Look for more reviews of custom Brickmania LEGO kits in the coming days.