For a long time I used non-LEGO plastic canopies on my aircraft and helicopter models, but in the last two years I have been steadily replacing them with purist brick-built ones. Usually while I was doing this, I also fixed up some other issues.

I have had models of an RA-5C Vigilante, A-7E Corsair II and F-14A Tomcat for more than ten years. The models represent aircraft that were assigned to the nuclear-powered aircraft carrier USS Nimitz, in 1978, and carry high-visibility markings that were typical for US Navy jets in the Seventies. The models were showing their age: their stickers were peeling, they were built with somewhat grubby-looking old grey LEGO, some of the white parts dated back to my childhood and were pretty badly yellowed and, finally, I have picked up a fair few new parts and tricks since I built them. They are the final three models that still had non-LEGO canopies. 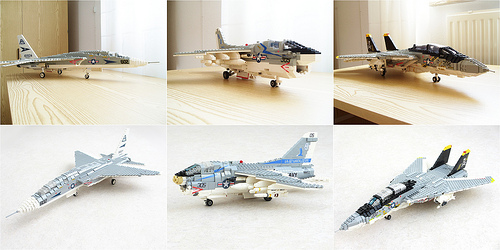 The new models are built with new grey and I gave all of them new stickers. The Tomcat had been updated before, and apart from the canopy, its shape remained the same during the rebuild. The other two jets, however, were rebuilt from the ground up. I hope you agree they now look good to go for another decade.

1 comment on “Out with the old, in with the new – revising and updating older LEGO models”