Mike Doyle spent over 600 hours to create this majestic fantasy cityscape called Odan. The creation depicts the peaceful contact of extraterrestrials with a race of highly spiritual humans. The diorama measures 5′ high by 6′ wide, but more impressive is its consistent quality in every corner as is characteristic of Mike’s focus on detail. We interviewed Mike about his work, which you’ll find below. 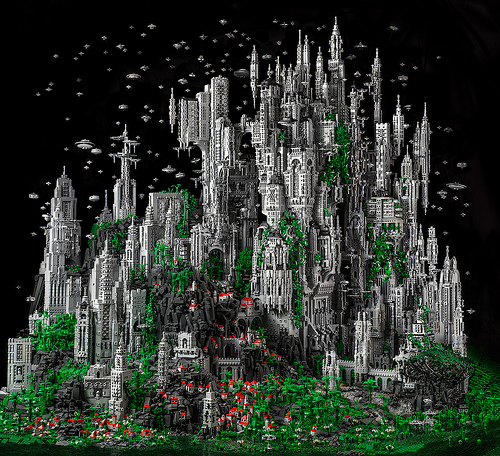 The Brothers Brick: How did you determine the visual style of this creation, since it lies half-way between fantasy and science fiction?

Mike Doyle: The visual style evolved over time along with the theme. At first, the intent was to do a piece that was of a medieval society on a spiritually awake planet. It was to be sort of LotR with meditation and the spiritual arts. I was looking at castles for inspiration at that time. You can see the first part of development in the earlier Flickr shots of this.

After creating the Sanctuary Gate (Issis Elb’ien) at the top of the falls, I realized the style of this structure was more appropriate and interesting. It has a bit of an eastern feel or Angkor Wat look. This felt more spiritual to me. So, I went back in and pushed the detail further on the things that I had created and worked to bring in some Asian influences. I also began looking at Mesoamerican structures for inspiration which I later integrated in the piece. Additionally, the theme went from a medieval culture to a space faring one which changed the look a bit.

TBB: What drew you to this style?

MD: This piece corresponds to a new point in my life where spirituality is of high concern to me. I have begun meditating and am working on astral travel. As well have been researching many phenomena that have been reported in the ancient Vedic, Vedic Sanskrit, near death experiences and more. Funny enough, this led me to research ufos which goes hand in hand to all these concepts of spirituality. Inspiration for this came from Dr. Steven Greer, founder of the Disclosure movement and CE5 (close encounters of the fifth kind) protocols for vectoring ETs to his teams’ location. The ufo research transformed the piece from a medieval culture to a spiritually and technically advanced one but still remaining squarely in the spiritual realm. So, I began integrating landing pods (made from metallic Bionical shields. I loved the look of these as they appear like floating lily pads or something organic.

Because the city is an ancient one, I had wanted the main city structure to look somewhat cobbled together as if it had evolved over time. There is little symmetry to it beyond local additions. The style also progresses a bit from the more direct interpretation of castle look on the bottom, to more unusual as you go up. 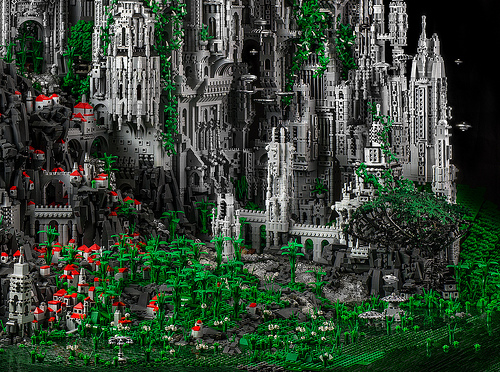 TBB: How did you plan this massive build? How does the finished product compare to what you initially imagined?

MD: There was not much planning at all beyond looking at some castle artwork. I knew I wanted a castle on a hill and an older city that would work its way up the hills. The process is an organic and intuitive one. I build for a few hours and then stare at it for a while and begin to see what should come next. It is not a totally smooth process. There are areas in the landscape where I pulled up everything and started over. I really only knew I wanted it microscale and very large. I approach each session with prayer as well which seems to help put me in a positive state of flow. I try not to think too much when I build but rather let things happen. I think planning is more like hiking up a mountain. I know basically where I want to go and simply follow a path one step at a time. I don’t know ahead of time the particulars of the trail and try to keep focused on the moment. Generally, like hiking, the path is revealed to me at each twist and turn. Eventually, I find myself at the top of the mountain. Also, if I’m honest with myself, I really stink at planning. Inevitably the process is more a natural one for me to achieve.

As far as comparison to my original vision. It is bigger than what I had originally thought it would be – that is for sure. Also, I didn’t expect it to take a technological twist. Beyond that, I didn’t have a clear picture in the beginning so it’s about what I had hoped it would be.

TBB: What was the most challenging aspect of this project?

MD: I think patience can be difficult. I had expected this only to take 3 or 4 months, but ended up being double that. Also, simply funding this is really tough. I never seem to have enough pieces or enough of the right ones. This and waiting for the orders to come in can be frustrating.

TBB: You did a Kickstarter for this creation once before, that didn’t succeed. What are you doing differently this time on your new Kickstarter project?

MD: Well, I think a few things. Firstly, I have a finished work this time around. This much better capture people’s imagination and interest, I think. In the first attempt, the piece was perhaps only 20% complete and much less impressive. This time around I’m also offering more interesting rewards. For instance, I have five buildings from the model that I have replicated for DIY kits. These kits range anywhere from 220 pieces to around 3000 pieces and include a small fine art print as well as a history of the building in context. Finally, I lowered the funding goal to a more achievable level. 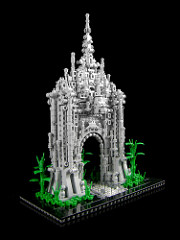 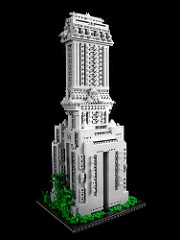 TBB: What will you do with Odan now that it is finished?

MD: The piece itself is in the process of being disassembled for use in future mocs – again, it’s a money thing. As for the series, I changed the original theme from “Odan” based to “Contact” based. The Contact series is designed to promote the beauty of all intelligent life forms as extensions of our family – children under the same creative force. This broadens the whole experience to far more subject matter. I am thinking that my next work will be a representation of expanded consciousness – which will be more abstract in nature. Other pieces could range from tender ET moments – like mothers caring for their young – to contact events to other fictional pieces as Odan was. The story might include a beautiful old Dutch style image of spiritual fruits which some near death experiencers have seen in other worlds. Or perhaps future mocs will simply cover other exotic ET locals. I hope to be interviewing contactees to see what worlds they have seen in their expanded consciousness. 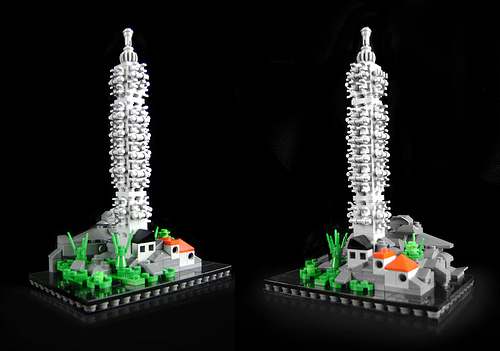 TBB: We noticed that your upcoming publication called Beautiful LEGO features Odan on its cover, can you tell us more about what’s in the book?

MD: The book is a celebration of all the beautiful work I see on the web. It includes work form about 80 designers and has around 380 different pictures of mocs. The book has been treated like a fine art book – which I think is new to LEGO themed books. Pages will have usually 1 or 2 images with a good deal of white space and a simple credit on the bottom. The idea is to elevate building to more of an art level. While many of these mocsmight be familiar to the readers, I have retouched most the pieces – color balanceing and adding complementary backgrounds to freshen the pieces up. To me, many of the mocs seem new simply because the presentation is so much better.