Last month, we announced that each month we’ll be featuring a new photo by one of our readers on Facebook and Twitter. After TR kindly arranged everything, I had the privilege of picking the first month’s cover photo winners.

For Facebook, it only seemed fitting that I should pick a photo of the Cybercity collaborative build that RoninLUG & friends (led by Andrew Lee) put on for Bricks by the Bay 2011:

For Twitter, I picked this fantastic helium transport by Robert H. (Robiwan_Kenobi): 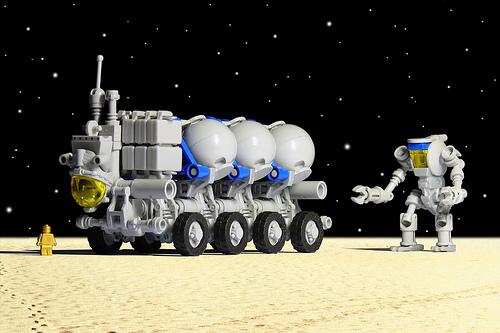 I’m really pleased by just how much participation we got, with over 170 photos from 130 builders. It seemed like everybody submitted their best work this first month, and that made my job incredibly hard.

(Pssst! With so many awesome photos, here’s a tip. Remove your photos from the pool and add them again. We’ll consider them again another month.)

We hope readers and builders alike enjoy this monthly challenge, and I’m looking forward to what other contributors pick next month and beyond!