There’s something about the Sixties. In the Western world the standard of living was rapidly increasing and there was a sense of optimism about the future that shows in the design of the cars and jets from this era. Technology seemed to promise a better a life for everyone. Anything seemed possible. Aeronautical technology, in particular, moved forward at an amazing pace. A manned aircraft first flew faster than the speed of sound just after WW-2, but by the Sixties operational jets were routinely flying at speeds more than twice as fast. Even higher speeds didn’t just seem likely; they seemed inevitable. In many ways the Convair F-106 Delta Dart is typical for jets from this era, with a highly swept-back wing, a sleek area-ruled fuselage and a sharp nose. 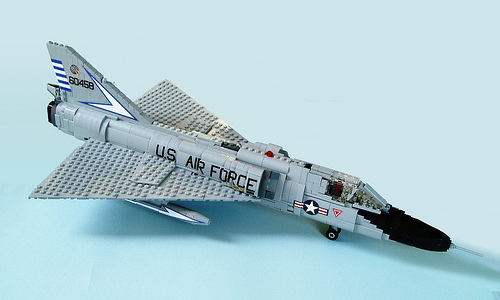 However, something sinister lurks underneath. The Sixties were also a time when it looked as though the Cold War could turn very hot. A high speed meant the ability to intercept enemy bombers from a larger distance. Intercepting bombers was what the F-106 was all about, with an unguided nuclear-tipped air-to-air missile tucked in its internal weapons bay. This makes a long stand-off distance a very desirable feature! 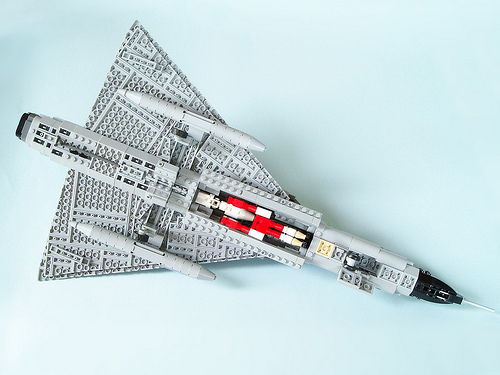 I hope I can be forgiven for blogging one of my own models, especially an older one. It was built for an article in Brickjournal Issue 22. It has been out for a while now and this prompted me to finally post multiple pictures.

2 comments on “The nuclear-armed Dart”