Mike Crowley passed away yesterday. He was my friend.

Mike leaves a legacy behind in the LEGO community. So many of us were blessed with his friendship and presence, and his absence due to illness in recent years has been noted. He was such a big personality with such a passionate, caring heart. This world is a little dimmer without him in it. 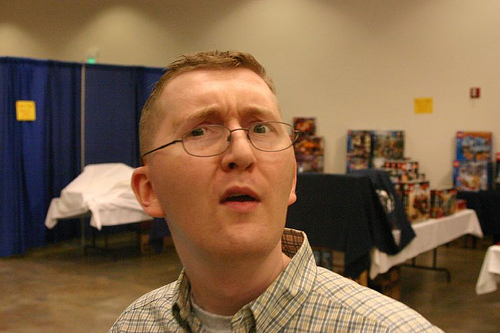 His activities with NELUG notwithstanding, Mike was a prolific and brilliant builder. His flickr stream is filled with such innovative uses for parts that showed such character for what he was trying achieve with anything he tried.

Beyond his building, beyond his artistic talent, Mike is, was, and always will be a friend first and foremost. In looking back, my memories aren’t always of the incredible things he built. My memories are of laughter until our sides hurt; of feather-boas and tiaras. Of a harrowing van-trip through downtown Portland accompanied by Lonely Island’s “I’m On a Boat.” My memories are of Chinese food, and the EMP. Of “confessions” at T.S. McHughs over nachos. Of late nights at LEGO fan conventions (which many attendees will tell you flat out that the brick is nice, but the friends are better).

My memories are of late night talks, of LEGO and music, movies and TV, of life and relationships. Of finding a way to make everything so bright when it should have been dark.

Mike made such an impact in my life, and the lives of others. All of us here at The Brothers Brick knew and admired him as a person and as a builder. He’ll be sorely missed.

I invite you to share your own stories and memories of Mike in the comments.

You can also read Mike’s obituary, along with details about funeral arrangements and donations, on the funeral home’s website.