A year ago today, we shared LEGO’s official announcement about their new Friends line. You may recall that images had leaked a few days earlier, and there was already massive controversy swirling all over the web.

The hubbub centered around the very idea (the nerve!) of “pink LEGO” or “LEGO for girls.” Critics suggested that LEGO was reinforcing gender stereotypes and that the sets had been dumbed down for girls, lacking the normal construction-based play common to all other LEGO sets. After our initial shock at the new “mini-dolls,” adult fans of LEGO (AFOLs) generally responded positively, even if we haven’t embraced LEGO Friends as deeply as the latest UCS Star Wars or modular building sets.

The late Heather Braaten summarized the initial AFOL consensus nicely, in a comment on our original post:

I think this is as close as LEGO has ever been to getting it right when it comes to targeting the young female demographic. Appeal to the people who buy the toy for their little girls by making them appear girly and cute and then sneak in the universal appeal of being able to create whatever your imagination desires – whether it’s pink and frilly or a mecha robot that just happens to be purple. I’m not a big fan of the “doll” fig but I think that’s the sentimental side of me speaking. My little girl will probably adore it. Just as long as she builds, I’m a happy camper.

By now, multiple waves of the actual LEGO Friends sets have been out for nearly a year, but the controversy really hasn’t abated. One organization even included LEGO Friends in their list of worst toys of 2012. Really?

As infrequently as I bring up politics, long-time readers of this blog will already know that my personal politics lean rather far to the left. I’m not shy about calling social injustice when I see it, and I’ve posted about marriage equality, pacifism, racism, and so on. Whether you agree with my particular viewpoint or not, I suspect my “progressive credentials” here in the LEGO fan community are not really in question. But I also take issue with unthinking, reactionary opinions from either end of the political spectrum.

Unfortunately, I think that much of the negative criticism surrounding LEGO Friends has been of the unthinking, reactionary sort, and it deserves a good debunking.

Parent and LEGO fan Ty Keltner responded to some of the criticism during a talk at BrickCon in October:

The Lego Friends Butterfly Beauty Shop … remains a noncommercial building toy that promotes an understanding of spatial relationships and calls into play fine motor skills, problem solving and creativity. The fact that it does so by providing the material to build a beauty shop (and then, once that’s done, any number of small square houses that differ from the ordinary Lego house only in their color) shouldn’t be any more “destructive and oppressive” to youth of either sex than the boxes upon boxes of Legos [sic] offering more stereotypically masculine battleships and superheroes.

David Pickett over at Thinking Brickly doesn’t necessarily disagree with some of the critics, but takes on the claims that LEGO Friends sets are dumbed-down (“juniorized” to use AFOL-speak) in terms of construction complexity, and that the women and girls of Heartlake City have been locked in gender stereotypes. David’s post is particularly interesting as it compares LEGO Friends to the new Barbie “construction” sets.

I’ll readily admit that LEGO Friends sets really aren’t my thing — I’ve bought a few to see what the fuss was about, and picked up a few more for parts in interesting colors. I’ll also agree with Ms. Dell’Antonia that these sets don’t do a whole lot to change existing gender roles among children. But is that really the LEGO Group’s responsibility? Like David, I have a lot more problem with LEGO’s marketing today than I do with their core set designs.

Remember this beautiful ad from 1981? 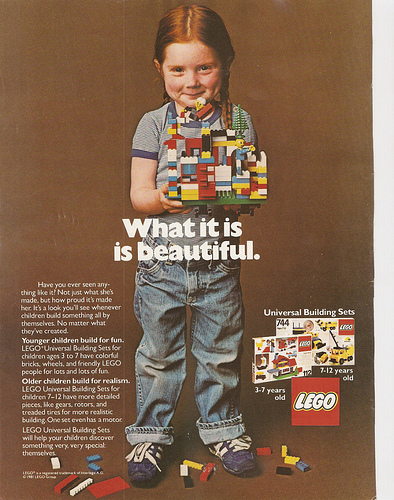 This classic ad demonstrated a clear understanding of gender-neutral childhood development, and contrasts strongly with the gender-locked advertising for today’s play themes — Ninjago, Star Wars, and even LEGO City — that I encounter in LEGO’s TV commercials and in print. When was the last time you saw a girl playing with a LEGO bus or recycling truck in a LEGO ad? I certainly haven’t (though I’ll admit to being outside the target demographic, so it’s possible I may have missed it, and I do love the Build Together campaign).

Despite the advertising industry falling over itself praising LEGO’s latest “creative” ads (more often than not a leaked sample or test ad from an agency bidding on the LEGO Group’s business, and not an actual ad you’ll ever see LEGO use), I believe that the real advertising that children and parents see does reinforce gender stereotypes and traditional gender roles. I’d love to see LEGO City and Creator in particular marketed as often to girls as to boys.

includes a female astronaut, while the new 60003 Fire Emergency

And yet, the female astronaut in Space Center is the one in all the pictures wearing the opaque helmet, so you’d never know — again, a distinction between a gender-balanced set design and the marketing for the set.

Do LEGO Friends sets include colors that many little girls are attracted to? Undoubtedly. Do the jobs that Mia, Olivia, Andrea, Emma, and the other LEGO Friends characters perform in Heartlake City reflect the wish-fulfillment of the average 8-year-old? Presumably (I wouldn’t know). Nevertheless, I believe that the actual set designs across the full range of the LEGO Friends line do no more and no less harm to the progress of the human race than any other LEGO sets.

What do you think? Sound off in the comments…

22 comments on “The first year of LEGO Friends – worst toy of the year?”