After a brief hiatus the Boilerplate & Beyond interview series returns with another baker’s dozen of builders from around the planet. This time around we’re starting in Brazil with Gilcélio Chagas who brings a much needed breath of fresh air to the hobby with his diverse mix of building skill, sense of adventure, Latin good looks and as this interview will illustrate, a way with the ladies. I recently sat down with Gilcélio, rocketing across the Third Bridge towards his home town of Vila Velhas. We talked about the Treaty of Tordesillas, Pele Vs. Messi and how Vila Velhas earned its nickname “the land of green shins”. We also talked about LEGO. 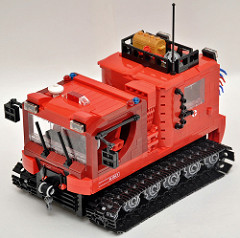 KG: A perusal of your photo-stream on Flickr makes it clear that you love building large-scale cars. How do you approach building vehicles and which vehicle has been the most challenging to build?

GC: I don’t have a rule to make my builds, I always start with the difficult part of the car, that way I expend less time if I can’t make it. Of course it’s more common for me to start from the front, that in most cases has more details and requires more attention.

The most challenging vehicle for me comes from a movie called Gran Torino, directed by Clint Eastwood, the car gives the movie its name, and every time that I see the film I get crazy to make it in LEGO, the curves gives a difficult special touch in this adventure.

KG: When working on a difficult model, how much advice from other builders to you typically ask for, or do you prefer to go it alone? When you give building advice, do you consider the builder’s feelings or try to be as honest as possible?

GC: Sometimes it is important to ask for a second opinion, who is riding puts a bit of feeling in the assembly and it ends up getting in the end result, the second opinion can be used exactly for this, take away the sentimentalism part and assess impartially.

I think I asked for advice twice, the first was the Dodge Charger that I asked the opinion of Lino who gave important tips for the project and the second time was my most important project in the island desalination that I counted on help from Nannan who was a very important aid. 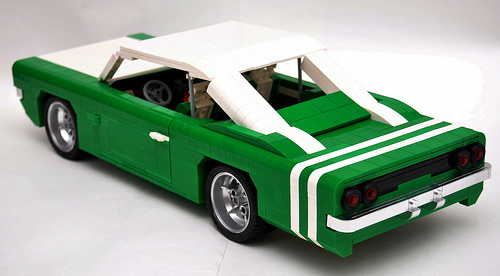 Thanks Lino and Nannan.

KG: You have drawn inspiration from the ultimate video game system, the Atari 2600. Is it just nostalgia that drives you to build in 8-bit style or is there something more? Also, what games would you like to tackle in the future?

GC: When I started with Atari 2600 project, I had in my mind the idea to immortalize in Lego pieces the Atari games that a lot of people have never heard before, and I couldn’t let this important part of my childhood die in this way. 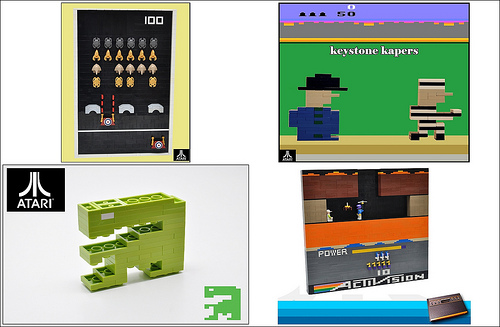 What made the Atari so good was the fact that if you wanted to play with someone you had to go into the house of a friend. There was nothing online, it was all in someone’s home and that made the game even cooler this interaction and simplicity of the games. “If you die it’s my turn.”

And that’s the reason that I’ve made my projects so simple, without many resources because Atari was like that, simple and captivating.

KG: Describe LUG Brasil. How did you come into contact with the LUG and what happens at a typical meeting? Both the United States and Brazil are among the most racially diverse countries on the planet, but unfortunately most American LUGs do not reflect this diversity. Can the same be said for Brazil?

GC: The LUG Brasil is an excellent place for Lego lovers like us, we have great builds there, challenges, meets, tips, and things related with this hobby that we have in common. My contact is basically by the internet and face to face meeting when it’s possible.

We have a good diversity of the Brazilian population, here you can find all kind of races, sex, religions etc. But the LEGO in Brasil is very expensive, sometimes the price is so high as to be 4 times greater in other countries, which makes LEGO access more difficult to the people with less purchasing power.

KG: You recently received some nice and well deserved attention for your water purification model online, on wider read sites like the Sci-Fi fan blog io9. How did you find the experience, and do plan to revisit that type of model again? 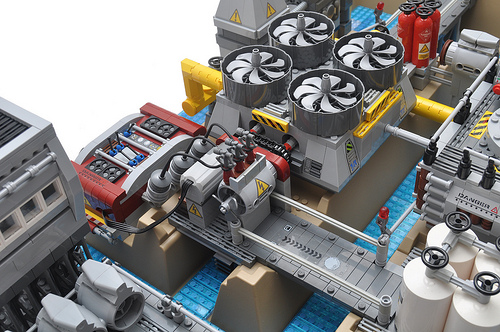 GC: This project arose from an academic way, I was reading a lot about the process of desalinating water and I understand how difficult and expensive it is to perform this method. It is much better to take care of our natural resources of fresh water, and I thought why not make a LEGO replica, of course it is not exactly like that is much more complex, but I think the message was passed.

I have plans for a project that has the same goal, preservation. We run a big risk on our oil rigs and this inspires me to build something in this area, well drilling at great depths.

KG: I understand you recently travelled almost 7000 miles to visit Seattle for BrickCon 2012. Can you give our readers an anecdote or two, and what you took away from the annual event.

GC: What a great opportunity to talk about it, thank you, it was an amazing experience. One of the most interesting things I remember is the kindness of people, even with my difficulty communicating because of my English everyone was super attentive and helpful. Thank you to all of you who were there, but there are two stories that I really want to tell here.

The first was a lady who’s name unfortunately I cannot remember that asked me if I liked soccer which was my favorite team in Brazil and things related to soccer and at the end of the conversation she asked me when I would go back to Brazil and I said only on Tuesday after BrickCon. She picked up the phone and made a call in front of me when she finished she looked at me and said “I got you tickets to watch a local soccer team on Monday night” and it was amazing to watch the soccer game in Seattle. 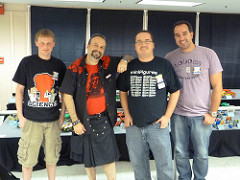 Thank you to the lady who unfortunately I cannot remember the name, the lady was amazing.

Another thing that I couldn’t forget to talk about was about meeting in the hotel, when I met my friend Lino and his friend Guy. The bet was made before the travel. I have to say thanks to Lino and Guy, and of course we gonna have more in the next year.

KG: How was your recent Expo, and what does the future hold for LUG Brasil?

GC: Our Expo was amazing, we are expanding every year and more people are joining to develop each of these areas: space, city, Dino, sculptures. The most positive thing was the involvement of more people. I believe that the result will make other members want to join as an exhibitor and other visitors become members. For the next year are already planned some small workshops and lectures. I’m counting on you here next year.?

KG: My passport situation is a little dicey, but if by “counting” you mean hoping for the best, then yes. Now, what were you saying about the future of LUG Brasil?

GC: I see that we are very well, having good events and we hope to soon make an international convention. Today we were visited by some foreigners in our events. We are far removed from major centers and I think that makes it difficult, another thing is the lack of effective support, our event is free admission and virtually bench by the leaders of Brazil and its employees LUG. But we are on track I’m sure.

GC: Now go turn the page, I’m joking, we could start with a Pick A Brick here, then send all kinds of sets to Brazil without restrictions, and mostly, improve the prices.

KG: Can you foresee a future where Brazil and Portugal unite their mighty LUGs and save the world from the vise-like grip of LUGPOL? Think of it as a modern Treaty of Tordesillas, if you will.

GC: The LUG Brasil appreciate very much the Portuguese support in your beginning, mainly the Community 0937. There is integration between groups, including competitions together.

We scheduled a big contingent in LFW 2011 came 25 people of the two groups. We travelled to LEGOLAND wearing the shirt of the event. 2012/2013 it’s called year of Brasil X Portugal, we scheduled new activities between us. But every group has its own peculiarity and remain its own activities in an independent way.

KG: So you’re saying there is a chance!

KG: If you had to select just one of your models for enshrinement in the great FOL Time-Capsule, which would it be and why?

GC: This is a difficult question, all buildings have your own particularity, I guess that I would choose the desalinization island, because this build it’s about preservation of our own resources against the high cost to desalinate the salt water.

GC: Humm, it would be an amazing opportunity, probably a Model Team car, a car that is very ordinary in my city, called the Volkswagen Brasilia.

KG: Taking time, money and proximity out of the equation, name two builders that you’d like to collaborate with on a project?

GC: I need to say two names: Lino Martins and Nannan Zhang. Lino is an awesome builder that can build his wishes into realty, and Nannan can make everything that he builds an art.

GC: Perhaps Santos Dumont, he was a very creative inventor and I think that would be a very good Lego-Nerd.

GC: My Time and Imagination.