We generally pass up all the “World Record attempt!” tower builds that seemingly happen constantly, because, well, they’re not all that interesting (and most often promote some business or event that doesn’t need any additional coverage from us). But a recent experiment by the Open University is a bit more intriguing.

According to the article on the BBC, Dr. Ian Johnson and his team set about to answer the question, “How many Lego bricks, stacked one on top of the other, would it take to destroy the bottom brick?” And how tall would that hypothetical tower be? 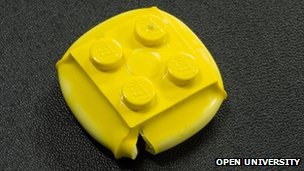 Based on calculations of the average 2×2 brick’s weight and measurements of force exerted on the brick by a hydraulic ram until the ABS failed, it would take an average of 432 kg (950 lbs) to crush the unlucky brick. That’s a hypothetical 375,000 2×2 bricks, towering 3.5 km (2.17 miles) into the sky.

Dr. Fleming says, “The material is just flowing out of the way now and it’s not able to take any more. We’re getting a plastic failure. It means the brick keeps on deforming, without the load increasing. Metals can be plastic, and this plastic is being plastic.”

Read the full article on the BBC, and feel free to suggest other LEGO experiments in the comments! Who knows, we might head to a local university lab ourselves and give your test a try.

7 comments on “How many LEGO bricks stacked vertically would crush the bottom brick?”