Speaking of the inimitable Mr. Iain Heath of The Living Brick, it’s been nearly six years since his Miniland Stephen Hawking began taking the Internet by storm. Iain’s latest experiment in cloning little plastic cosmologists has been successful, and you can own your own LEGO Stephen Hawking with The Standard Model. 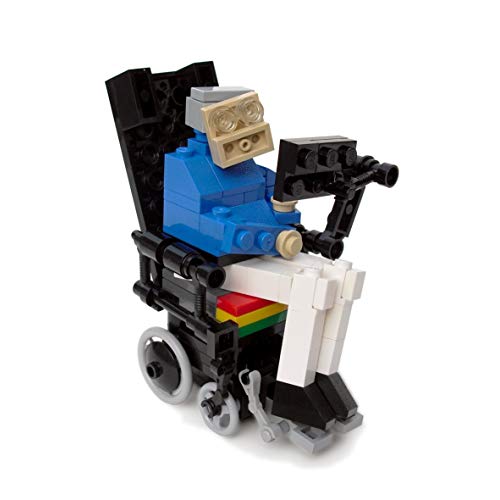 Iain surprised me with a copy of his custom set yesterday, so here’s a quick review. (No photos of my own, since the whole point of a custom kit made by a fan is the parts list and their personal design.)

One of the reasons Iain’s LEGO version of Professor Hawking has stayed viral for so long is that it evokes the man himself so well. I had the privilege of hearing Stephen Hawking give a lecture on M-theory here in Seattle this summer, and Iain has captured the nuance’s of his appearance wonderfully, from the angle of his head to the computer he uses to communicate.

The instructions are clear and easy to follow, printed on nice glossy paper. It’s always interesting building someone else’s design, since it gives you a view into their thinking process. Iain’s model is full of one-stud connections and bricks attached at odd angles — this isn’t a model to give your six-year-old to play with on the floor.

At $39.99, you’re not buying this model to use the parts in your own LEGO creations. Iain has only produced a limited run of 100, and you’d be buying it because you think it’s awesome (like I do) — or because you know it’d make a perfect gift for that LEGO fan who has everything. “The Standard Model” will make an excellent display model on the desk or mantle of any fan of the universe, Stephen Hawking, and little plastic bricks.

You can pick up your own copy of The Standard Model

from Amazon.com. If you can’t find the link later, just remember TheStandardModel.info (which’ll take you to Amazon).

UPDATE: Iain is running a bit of a Black Friday sale of his own. Enter the promo code “BROBRICK” at checkout and you’ll get $10 off. Combined with free shipping from Amazon, that makes this a pretty sweet deal for a custom LEGO kit. The sale starts at 6 AM PST on Wednesday (Nov 21) and runs through midnight on Sunday.

2 comments on “Bring LEGO Stephen Hawking home for the holidays”