In news that proves again that taking your life-size LEGO guns outdoors isn’t such a great idea, a sheriff’s deputy in Woodinville, Washington (near Seattle) fired on a man waving what appeared to be a gun.

Here’s the AP story in its entirety:

King County Sheriff Steve Strachan says he’s grateful a deputy did not injure a man who waved a gun made of Lego toy building bricks.

The deputy had responded to a report of a man waving a gun at passing cars Thursday in Woodinville. The man raised what appeared to be a gun at the deputy who fired several shots.

The suspect dropped to the ground unhurt. Deputies discovered the gun was a toy and the man was a resident of a nearby home for developmentally disabled adults.

Via The Seattle Times.

Another Times story adds, “The man, who deputies have encountered before, has a ‘fascination with guns’ and had made the handgun out of black Lego blocks.”

Thankfully, this story ended without injury, but this type of situation is why the Seattle Police Department influenced the absence of realistic LEGO guns at BrickCon…

UPDATE: Local TV station KOMO has an updated story with pictures of the gun. 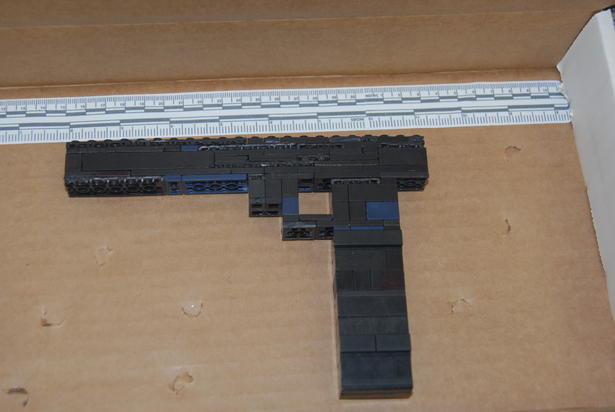