LEGO has just officially unveiled the newest addition to their Ultimate Collector Series of LEGO Star Wars models, the opinionated astromech droid we all know and love, 10225 R2-D2. Artoo ships in May 2012 for 180 USD and includes 2,127 parts. 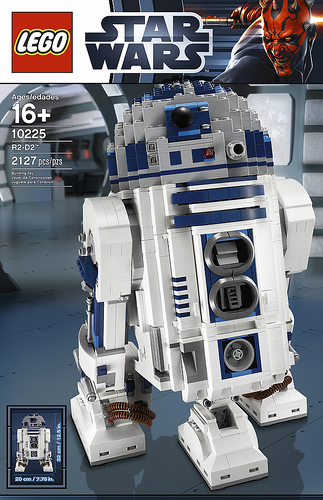 Tons more pictures showing off details and functionality in the photoset on Flickr.

Presenting the iconic R2-D2 as you’ve never seen him before! Everyone’s favorite droid from the Star Wars galaxy is now part of the Ultimate Collector Series and features fantastic detailing, such as retractable third leg, front panels that open to reveal a universal computer interface arm and a circular saw, rotating head and 2 fold-out front spacecraft linkage control arms. With the included fact plaque and R2-D2 minifigure, this diminutive model is the perfect addition to your LEGO® Star Wars™ collection!

Available for sale beginning May 2012

only at shop.LEGO.com, LEGO® Stores or via phone.