The Brothers Brick recently purchased several sets from the LEGO Friends line in order to give our readers a feel for the new line. My 11 year old daughter and I reviewed the following sets and I let my nieces (6 and 8 years old) play with the sets for an afternoon. Nannan has already done one review from a parts perspective and Caylin has done one from the perspective of an adult female fan. Hopefully this review, from a father and daughter view, will be just as useful. 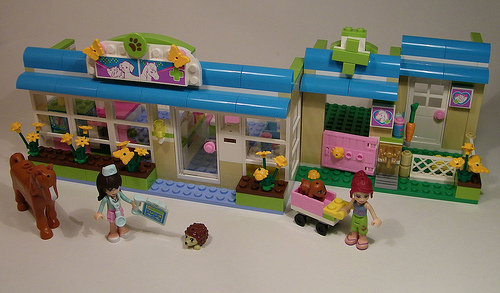 This was my favorite set of the four that we built. It’s a well-designed set with lots of play value. The exterior is a rather simple build but the interior is packed with some pretty cool details, such as an X-ray machine, scale, and examination table. It includes a stall for the horse and lots of new accessories, which are only slightly over-sized when held by traditional minifigs. It also includes the new flowers, which I liked. The new animals are cool, but I was pretty disappointed in the horse. It has no moving parts and the new mini-dolls can’t sit on it or interact with it in any way, except to stand on its back. So unless you’re going to build a horse-vaulting arena with it, the horse is pretty useless. I liked the mini-dolls more than I expected but they’re nowhere near as versatile as regular minifigs. The biggest drawbacks are that the legs can’t move individually and the almost total lack of connectivity. 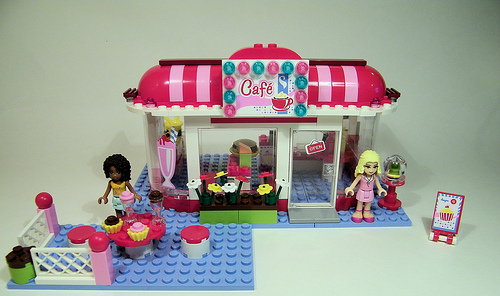 This set has the most interesting exterior of the sets we reviewed. But the interior is really good as well. It has a display case w/register, booth for customers and small kitchen area. The forks and knives will be useful and the mixer has some interesting connection points that I’m sure will enable it to take a place among its greeblish brethern. My main complaint with the set was the new cupcake pieces. They’re designed to hold a 1×1 round plate/stud but there’s really no “connection” as the 1×1 just sits in it. A tighter connection would have made this piece much more versatile. 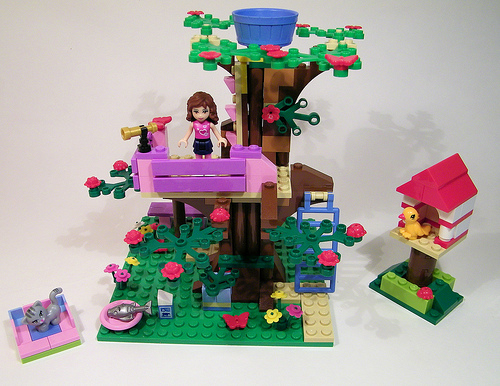 The tree house is a fun little set with some interesting animals. The tree design is really nothing new but it is sturdy and stands up under play very well. The set comes with the new flowers in red but also includes some of the old flowers. Having the two together in a set makes it immediately obvious that they two don’t go well together. They each have their place but together looks rather off. 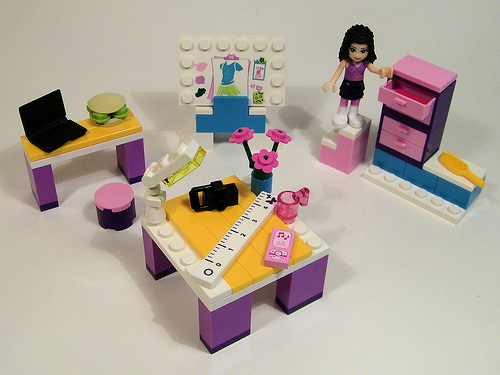 This was the smallest set we got and I’m not sure that it is a good buy for what you get. There are unique printed pieces in the set (ipod, anyone?) but there were no interesting design features.

To start with, I think that one of the biggest drawbacks is that the girls feet can’t separate and they can’t sit on studs. Also the horse in the Vet set can’t pose very well because the head does not move up or down.

Their hair is pretty neat because it can be switched with a different mini-doll or regular mini-fig. I also really like the three sets of silverware in the Cafe set. They are cool because the mini-dolls can hold it and it looks more real when they eat. Also in the Cafe set there are cupcakes that a single stud can sit in. I like those because it adds another food.

I like the pastel colors but I think there needs to be more dark colors in the sets. Also having only five mini-dolls could get boring because you can’t switch them around as much as you can with mini-figs. Having all the new animals and food is really nice. My dad had the cat chasing the bird. The new flowers, butterflies and Ladybugs add some more detail to the sets. Also, since every new animal I’ve seen has a hole in their heads, you can put bows and things on them all. The girls also have the holes so you can put bows and ribbons on their heads. The Vet set has a little hat for the veterinarian to wear. She also has an icepack that fits into the hole on the animals heads.

My two nieces both enjoyed the sets, but the 8 year old liked them the best. She already likes LEGO and she loved the new mini-dolls. Her favorite set was the vet because of the animals. My six year old niece is normally bored with LEGO as she prefers Playmobil. But she played with them for a couple of hours and specifically commented on “the pretty colors”. After I had put the sets away, she came up to me and asked if she could get those “Playmobil Lego sets” out again.

If you have any questions about these sets, please feel free to ask them in the comments. Here is a link to my entire gallery of Friends pictures. I hope this review was helpful to you!