Since the news is making the rounds on the web at this point, most of you are probably already aware of the upcoming LEGO Friends theme in 2012. The response has been, shall we say, mixed. Since I’m sure there’ll be quite a discussion here and elsewhere, I won’t shy away from sharing my own opinion. Bottom line for me: I’m not a huge fan of the new figures, but they bring much-needed diversity to LEGO people, and the sets themselves appear to be entirely brick-built, with some interesting new colors.

For those of you out there who’ve made statements about gender stereotyping, take a look at this photo of set 3933 Olivia’s Inventor’s Workshop: 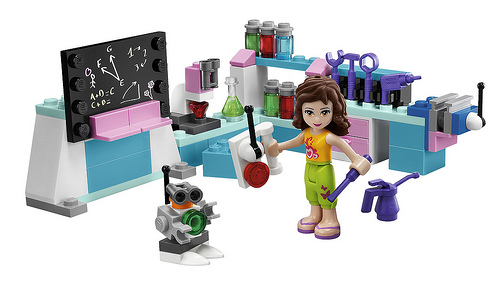 That’s right — Olivia has invented herself a robot in her laboratory through the use of math and science.

The main difference is in the scale and shape of the figures, called “mini-dolls”. Here’s a comparison: 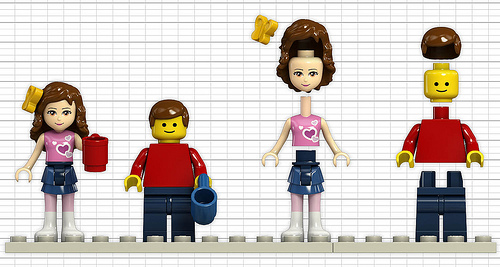 I’ve heard that the hair pieces are compatible with standard minifigs.

The buildings in the sets are built from standard bricks, rather than large, single-purpose elements: 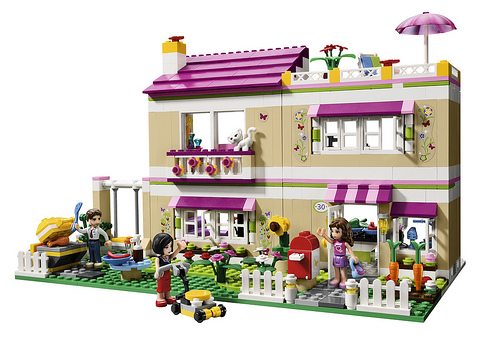 The LEGO Friends collection of 23 products ranges in price from $5.99 to $99.99 USD and the first 14 will be available for sale in select toy, discount merchandise, specialty and online stores beginning December 26, 2011 in the United Kingdom and January 1, 2012 in the United States. A rolling International launch will follow in the spring, with the remaining nine sets launching in the summer months.

“We felt it was time to test assumptions that girls aren’t interested in building and to breathe fresh air into a toy category filled mostly with pre-fabricated play experiences for girls,” said Jørgen Vig Knudstorp, CEO, LEGO Group. “We focused on creating a play experience centered on the joy of creation, while heeding the way girls naturally build and play. We are incredibly proud of the solution we deliver with LEGO Friends, and are resolved to build this platform for years to come.”

LEGO Friends is the first 100 percent LEGO building experience fully optimized to girls’ tastes and interests. Thousands of girls and their mothers worldwide participated in intensive research that validated the desire for more beauty, realistic details, accessories and interior building and role play opportunities in a LEGO offering.

Anchored by the introduction of a new mini-doll figure, LEGO Friends introduces a new LEGO minifigure platform tailored to girls’ requests for a more realistic, relatable and stylized figure. Designed to the same scale of the classic LEGO minifigure, the mini-doll figure stands roughly 5 millimeters taller than its minifigure sibling, yet features similar constructability, shares the iconic “claw” hand to hold the same accessories, can wear the same hair and headpieces, and is compatible with all LEGO building sets. A total of 29 different mini-doll figures will be introduced in 2012.

“LEGO Friends is one of the most researched LEGO projects ever and is a culmination of years of anthropological research with girls around the world to understand what they expect from a construction toy,” said Nanna Ulrich Gudum, senior creative director, LEGO Group. “In talking with girls and their moms, we understand that girls really want a LEGO offering that mirrors what the boys experience, but in a way that fulfills their unique desire for remodeling and redesign, combined with realistic themes in community and friendship.”

“Unlike previous LEGO toys for girls, LEGO Friends, at its core, does not apologize for being a construction toy and delivers, for the first time, a building experience in the same scale as our classic offerings,” Nanna Ulrich Gudum continued. “What LEGO Friends does differently is deliver the beauty, details, accessories, real world themes and need for strong interior play that the research revealed would make all the difference for girls ages 5 and up.”

The LEGO Friends story centers on the everyday lives and personalities of five girls in a fictional hometown called Heartlake City. Each of the friends—Olivia, Mia, Andrea, Stephanie and Emma—has a distinct personality and interests, such as animals, performing arts, invention and design, that are reflected in the models. Building sets reflect different parts of town where the girls’ adventures take place—downtown, suburbs, beach, camping grounds and mountains.

Children will be immersed in the new world they can create with LEGO Friends through a variety of brand experiences planned for 2012. In addition to providing product information, the LEGO Friends website will allow children to explore the personalities of each of the five Friends and the different spots in Heartlake City. The site will also feature an avatar creator, mini-movies, games, video building tips, story extensions, contests, news and an events calendar. Also planned are Interactive building events and road shows, promotions, magazines, digital content, a mini movie, in-store experiences, books and more. Check www.LEGOFriends.com for more information.

So, what do you think? Sound off in the comments.