With books about LEGO starting to fill up the shelves in one’s hobby room, how does the discerning LEGO reader choose which books to buy and read? John Baichtal and Joe Meno’s The Cult of LEGO

is an easy choice for inclusion in your LEGO library.

When the book arrived from No Starch Press back in October (yes, I’m that backlogged), I was pleasantly surprised at how hefty it was — an unexpected contrast to the paperback Unofficial LEGO Builder’s Guide.

For a book featuring hundreds of LEGO photos, I’m glad they released a hardback book with full-color, glossy printing.

John & Joe provide a solid overview of the LEGO hobby, from Bionicle and Technic to SYSTEM and Mindstorms, with sections dedicated to ApocaLEGO (including an appearance by Zombie Apocafest 2008), Steampunk, LEGO graffiti, and more. You’ll see a lot of the iconic LEGO creations that made the rounds of the ‘net a few years back — Henry Lim’s MC Escher LEGO, Sean Kenney’s Yankee Stadium, big LEGO battleships, the “No Real Than You Are” minifig, Hannes Tscharmer’s Jawa sandcrawler, and more.

As long-time LEGO fans and readers of this blog might infer themselves, the lists in that last paragraph support the justified critiques Nannan had about the book in his own mini-review.

Many of the featured models are the ones that merely happened to go viral on the web, not necessarily what we might consider “the best” of a particular genre. And with the exception of the sandcrawler (posted this past June, just a few months before the book’s release), nearly all of the LEGO creations in the book date to 2009 or earlier. 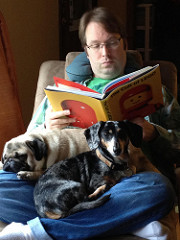 But I’m willing to forgive all these flaws in the face of lead times for printed books and the daunting task of making a niche subject like ours much more widely appealing. It was really lovely to see The Cult of LEGO on the Seattle Times’ front-page banner and included in Powell’s Books Black Friday deals as I shopped in Portland after Thanksgiving with my mom.

And for me, it’s those local, personal connections to the book that make it a must-have — seeing pictures from BrickCon, reading profiles of my friends, and thinking back to fun times with Lewis & Clark on the Pacific Coast (the late, great Mr. Pugsly even makes an appearance).

Despite all the pretty photos, John & Joe manage to weave a thread of humanity throughout The Cult of LEGO, so that in reading it you can step into this tight-knit yet simultaneously open-armed world of builders and bloggers, brick artists and LEGO engineers.

Whether you’re a casual LEGO fan or a hardcore builder, The Cult of LEGO has a lot to offer. The book isn’t so much about the unattributed pictures of viral LEGO models you’ve been sent a hundred times by relatives and coworkers as it is the diversity of real people and the community behind them.

My verdict: Find room on your LEGO shelf for The Cult of LEGO