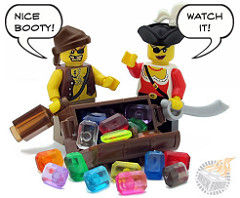 One of the things I love about BrickForge is that they seem to be just ahead of what LEGO ends up producing — from cows, pigs, and crowbars a few years ago to 1×1 round tiles and park ranger hats in the upcoming 2012 LEGO City sets. Does The LEGO Group have a spy in BrickForge world headquarters?!

Anyway, I always like to learn more about the LEGO vendors and custom accessory makes who populate the brick “ecosystem,” so it was great to run across an interview with Kyle Peterson on one of my favorite non-LEGO blogs, MAKE.

I hear some 3rd party manufacturers of Lego accessories recycle old bricks in their ABS, grinding them up and adding them to the molten plastic. Can you talk a little about this?

Obviously the ABS has to come from somewhere. BrickForge deals with very large production runs – thus we use specifically dyed ABS pellets during the self-contained, automated injection process. Other vendors may use a smaller, lightweight injection press for smaller production runs. This requires a manual feed of plastic into the hopper. Either the artisan has to purchase pre-mixed pellets (that match the LEGO color palette) or simply grind up and smelt existing LEGO brick. The first option is expensive, the second option is time consuming (not to mention having to deal with toxic fumes).

Read the complete interview on the MAKE Blog.