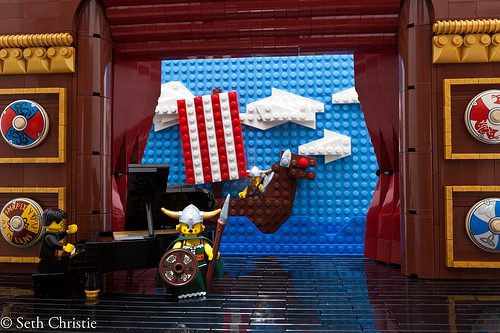 The last MOC I made was a viking ship nearly missing some rocks. After doing that, I had the idea of a viking opera in my head. This opera singer is assembled from a lot of different sets… who can guess the hair? I had to order quite a few pieces for this, especially for the gold guilding around the opera hall. Lego might seem like an odd creative outlet (agreed)… but the amount of stuff that you can create while still under the restriction of what’s available is quite challenging; there were several times when I had something in my head, but Lego doesn’t make the piece I needed in the color I wanted.