Gerard Joosten (aka Elephant Knight) just posted his latest in a line of large, detailed sailing ships. Christened The Lynx, it is a beautiful example of a minifig scale Clipper Schooner. 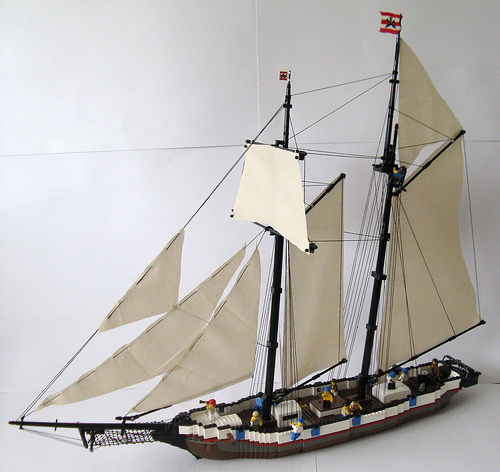 Gerard agreed to sit down with me and answer some questions about the ship and how he builds.

TBB: Thanks for taking the time to talk with me, Gerard. Tell our readers a little bit about yourself. How long have you been into Lego and what themes do you build in?

GJ: I have been into Lego since just before my fourth birthday, when I got 1464 Pirate Lookout. I have never been into a dark age, and my older brother said I’m the biggest AFOL in my family of 7 kids. I mostly build in Pirates and Space, with Castle a bit behind those. Though I dabble in almost anything, except for Steampunk.

TBB: You have two older brothers who are adult Lego fans. Do you feel that their influence and your early exposure to the online Lego fan community has had an impact on your builds?

GJ: They certainly had an influence. Dan built a ship in 2008, a bit before the pirates line came out, that really opened up my love for Pirates. Dan has also pushed me into doing more realistic stuff.

TBB: So why no Steampunk?

GJ: I am just not a fan of steampunk. I think the idea of spaceships and mechs powered by steam to be silly.

GJ: 15 years and it doesn’t look like I am going to slow down at all. 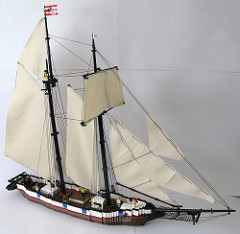 TBB: So is Pirate your favourite theme?

GJ: Pirates and Space are always competing for first, but I think Pirates has a bit of an edge, simply because I build better sailing ships then spaceships.

TBB: You are becoming well-known for your large, detailed ships. How is this one different from your previous builds?

GJ: Well, this is my second time using reference material, and my first time basing it on a real ship. Also, this is the first time I have built a ship in minifig scale, and used proper cloth (As opposed to paper) for the sails.

GJ: Somewhat. Using reference material meant I couldn’t be as loose as I normally would be. The hull especially took a lot longer since I had to match it up with something.

TBB: Is this your biggest ship so far?

GJ: It isn’t my longest, but I think it might be the tallest. The HMS Brunswick was 124 studs long, but a bit heftier. But the Lynx is wider and that has to count for something. I would have to say this isn’t quite my biggest, but it is close. 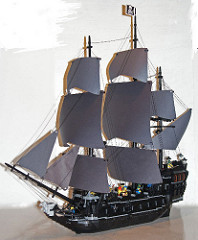 TBB: What was the most difficult part of this build?

GJ: I dunno. I think making the sails, since my scissors sucked. Can’t really say if any part of the actual build was harder then the rest.

TBB: What part of this ship turned out exactly how you envisioned it?

GJ: The angle of the masts. I got the idea how to do it, and it worked perfectly.

TBB: They do look really good. One thing that stands out on your ships is the custom sails and rigging. What do you use to make them? How much string went into the rigging on the Lynx?

GJ: In this case, I used cloth that I bought at Walmart. I usually use paper, but since the sails on this were larger then your regular sheet of paper, and since I wanted to raise the bar for myself a bit higher, I went with cloth. As for how much string, I don’t know at this point. By the time I dismantle this, I’ll know.

TBB: Are you going to start using cloth on all of your future ships?

GJ: I already converted one of my old ships to cloth sails, so I think it looks like it could happen, though paper is cheaper, and I am a bit of a mizer.

TBB: Where do you get inspiration for your ships?

GJ: Generally I just feel like building a ship, and I build one. In the Lynx’s case, Caylin challenged me to build a minifig scale tall ship, so that’s what I did.

TBB: As far as I can tell, your rigging is very accurate. How important is historical accuracy to you?

GJ: It is important whenever I feel like being historically accurate, which is happening more and more often these days. And since this ship was based on an actual ship, it was pretty obvious that I would have to make the rigging accurate. 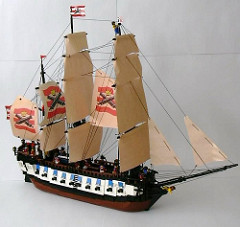 TBB: Is there anything you want to mention that I haven’t asked about?

GJ: Whenever I build a sailing ship, I like to compare it to my first sailing ship I got, 6250 Cross Bone Clipper. In this case, there isn’t even a comparison.

TBB: I have to agree! Thanks for taking the time with us.