Warning! This post is not about LEGO bricks but about the community on flickr. If you have no interest in the flickr LEGO community then please just ignore it. 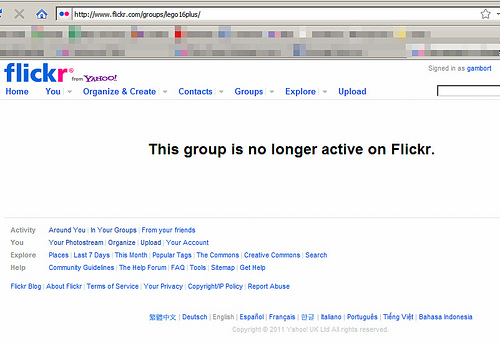 I went to visit one of my LEGO flickr groups the other day (Jan 29) only to find the above message. I’d got through a couple of minutes of before so I was a little bit suspicious. Inspection of my group list showed that LEGO 16+ had vanished from there too. Apparently it had spontaneously disappeared.

As the creator and an administrator of the group I was first in line to hear about it if something had gone wrong. I’d heard nothing. Over the following six days I’ve pieced together what happened. In LEGO 16+ we had a thread for leaks. All discussion in the group was only available to members of the list and one of those members had reported this thread to TLG. They had taken their usual action (lawyerly email) to flickr and Yahoo! (who are directly responsible for these issues) had decided to simply delete the entire group. Not the thread, not the links but the entire group.

I’ll note that I didn’t hear this from flickr but had to piece it together myself (with help). Immediately upon discovering the issue I contacted flickr about it. They finally got back to me today (six days later) with the following:

Your group was brought to our attention through Report
Abuse. Upon review, we determined that your content and/or
behavior was in violation and your account was terminated.

Thank you again for contacting us. If you have any other
questions, please feel free to reply to this email.

which is extremely helpful. Having heard various horror stories about Yahoo!’s attitude to its users I’d already anticipated this response and was, sadly, not surprised. Incidentally the guidelines basically says that if Yahoo! don’t like what you do they can do what they like. This is standard but most sites choose to explain things.

So what has this got to do with you?

Well firstly if you were interested in what went on in LEGO 16+ you might want to know what happened to it. It’s gone but we’ve moved to AFOL 16+. NB. you must be 16 or over to join this group and it does contain bad language, bad taste and other things some people don’t like.

Secondly, if you run or actively participate in a flickr group you should be very wary of this. If you allow or actively encourage leaks there is a chance the entire group could be deleted. It’s totally unreasonable but Yahoo! have a reputation for behaving in just this way. You might also want to be careful reporting people.

Consider it a lesson learnt the hard way by me so you don’t have to. Yahoo! do not care about you, your group, or anything you have done. Make sure you have a backup in place for any vital discussion and try to back up your flickr photostream.

EDIT: I realise my original post doesn’t make my issue entirely clear here. The loss of LEGO 16+ was a minor irritation as it wasn’t really a resource so much as a discussion forum. It had been replaced by a functional equivalent within hours. The loss of some of my other groups (eg. LEGO Techniques) would be far more tragic and I’ll be making sure it’s unlikely (certainty is impossible given Yahoo!s arbitrariness) to keep it off the radar. I recommend others do the same. Yahoo! do not care.