As was pointed out by some readers we did not manage to cover anything much from the recent and enormous LEGO Fanwelt exhibition in Cologne. This wasn’t by choice but simply that TBB doesn’t have anyone in Europe. Luckily Holger Matthes (HoMa) was in attendence and happy to write us a summary as a guest author. Many thanks to Holger for his help. 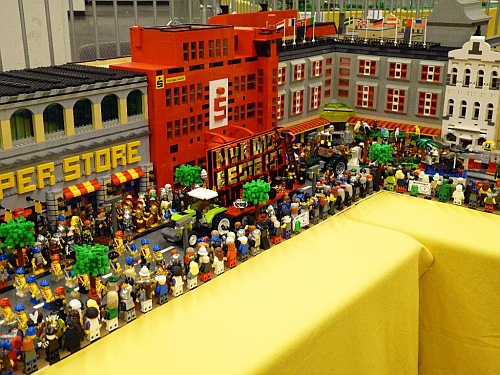 The biggest LEGO event in 2010 in Germany was held recently in Cologne – to be more precise in the 12,500 m² large hall 5.1 of the Cologne Expo. Besides LEGO visitors could expore classic model railroading like Märklin and others and another hall was dedicated to handicarft. This concept went well and did not only attract grey-haired modelrailroaders but tons of families. Overall this combined expo hat about 60,000 visitors!

But let’s focus on the bricks: Besides lots of known and unknown individual MOCs by more then 250 exhibitors the Carnival Parade has drawn the most attention amoung the visitors. Cologne is one of the most important cities for Carnival in Germany though the oranisation commitee from the MBFR club organised a fan project where everyone was invited to bring Café Corner style houses (158), walking participants (63) and funny, colourful motive cars (56). The 64,5 m long parade was seen by many many real life LEGO fans and visitors and more then 17,000 minifigures!

Fans and visitors were called to vote for the best motive car. After all the 1875 votes were count, the winning car by Jürgen Bramigk was announced online

Not only the brick related figures were enormous: The exhibitors and organising team ended up in eating more then 100 litres of chilli con carne, 30 kg of french fries, 260 sausages, 35 kg of pasta, 150 schnitzel, gallons of coffee and more … all prepared by Jürgen and his kitchen team.

Special thanks to the MBFR-team around Tretty and all the exhibitors who realised a great expo!