We recently received a copy of Beckett Media‘s latest foray into the world of fan magazines. 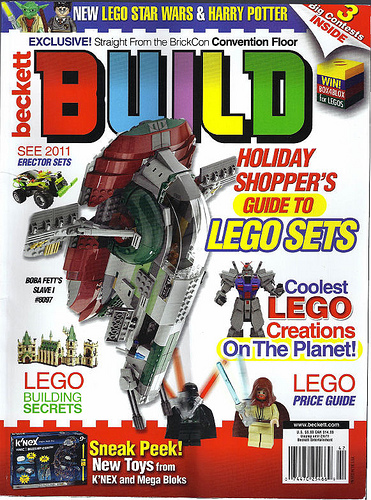 The features cover a wide range of topics, including trips to Legoland, interviews with Nathan Sawaya and Mariann Asanuma, BrickCon 2010, and Brickfilms on Youtube. There are also 5 features that deal with Mega Bloks, K’NEX, and other brands of building toys.

There were three features that caught my eye.

The first is a spread of popular Star Wars sets, with prices, pics, stats, and ratings. There were a number of errors, such as pictures of figs by the wrong sets and placeholders for numbers that hadn’t been filled in. While this is something that is to be expected from an advance copy, when I mentioned one of the errors to the editor, he said that a correction would be put on the magazine’s Facebook page. From that comment, I have to assume that this is not an advance copy, but the finished product.

The second feature I examined is called “Cool Stuff” and features creations by 13 different builders. Most of them were quite good. I asked the editor about the selection process and he said “We contacted many LEGO fans from around the world to feature them in this issue. They were all excited to be included in our premiere issue of Beckett Build Magazine!”. I contacted 9 of the builders and most of them said that they had submitted their work after a request was posted in the LEGO group on Flickr. With one exception, none of them had been notified that their creations had been selected. Hopefully the magazine is still in the process of notifying them and sending them free copies. There were two builders, with half-page spreads, who had never heard of the magazine and didn’t submit their work at all. Hopefully, that issue gets worked out.

The third featured was the article about BrickCon 2010. The captions list the name of the creation, the name of the builder and the name of the photographer. I talked to several of the photographers and they said that they were contacted through BrickCon and gave their permission for the use of their pictures. Most of the pictures featured the “Big In Japan” layout. The remaining pictures included one each of the Town layout, Castle, Mecha, World War II and Art. There was a significant error indicating that “Big In Japan” was the theme of the entire convention. In reality, BrickCon’s theme was “Tales of the Brick”. This was the error that the editor said would be corrected via Facebook.

Overall, the magazine has the look of a magazine that we would expect from a major publishing house like Beckett. It relies heavily on pictures and has a minimum of new information for the hardcore fan. It could be a good introduction to the new fan who is unaware of the greater online community. The price seems high for a casual browser of the newstands. The typos, errors, and lack of contact with featured builders disturbs me. That is not something I would expect from a professional publisher. Hopefully they put more effort into making improvements in future issues. If not, I foresee both a diminished credibility among readers and feelings of alienation among builders.