In addition to the large-scale, theme-specific collaborate displays that BrickCon has become known for throughout the LEGO fan community — from sweeping Castle landscapes to Great Ball Contraptions that would make Rube Goldberg envious — BrickCon 2010 will also feature several new and returning favorites.

If you’re still thinking about attending, you only have a few days left to register and guarantee custom-engraved bricks in your registration packet. If you have registered, don’t forget to also register your LEGO creations by filling out MOC cards. MOC cards help theme organizers plan for the necessary space, and more importantly make your creations eligible to win convention prizes.

Each of BrickCon’s group builds is designed to be accessible to every registered attendee (sorry, no contributions during Public Hours), regardless of how big or small your LEGO collection is, and whether or not you’ve even started building yet!

Zombies are so last year (and the year before)… The Brothers Brick’s official collaborative display this year takes its inspiration from the history, mythology, and pop culture of Japan. In keeping with the organic way we’ve put together layouts in years past, we’re not asking you to follow any particular standard, timeline, or even scale. We’ll have life-size ninja weapons, a minifig-scale rendition of the village from Seven Samurai, Ochre Jelly’s wonderfully unique homage to Hayao Miyazaki, the return of Mecha Godzilla, and whatever else inspires you to build something that’s … Big in Japan. 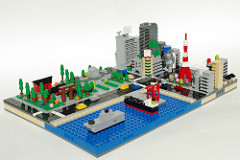 If you’re trying to think of an easy way to contribute something, consider building small for Big in Japan.

A Micropolis module isn’t parts or time intensive, and it’ll bring me one step closer to my dream of a microscale LEGO map of the entire Japanese archipelago. (I’ve built seven more modules after posting Micro Tokyo there on the right.)

Please sound off in the comments with what you’re planning to bring for Big in Japan, just so we don’t end up with three Mount Fujis.

Debuted at Bricks by the Bay earlier this year, Bricks of Character is “a Lego building theme featuring brick-built models of well known characters from film, television, literature, history, politics, or even just your imagination. Anything so long as it has personality, and isn’t just posed mini-figs” (*ahem* not that there’s anything wrong with posing minifigs).

Read more about Bricks of Character in the official announcement post on The Living Brick.

BrickCon 2010 is sure to be a lot of fun, but it’s also going to be bittersweet for many of us.

Following fly-ins at BrickWorld and BrickFair, the Vic Viper Fly-in at BrickCon will be the last fly-in to memorialize the influence and legacy of Nate Nielson, who died in a car accident earlier this year.

Though Nate lived here in the Pacific Northwest, nobody in the LEGO fan community had ever met him in person (or even knew his real name), but we all said that this was the year we were going to convince him to attend BrickCon. That can’t happen now, but members of Nate’s family will be in attendance, taking in our tribute to this legendary builder.

I’ll be coordinating the fly-in, but Keith Goldman — who was so instrumental in organizing the earlier tributes to Nate — will also be attending BrickCon, and I’m sure I’ll be leaning heavily on his experience.

I’ve personally invested a great deal of my own building energies lately in preparing an invasion force for Operation Bricklord: Europe at War.

“The setting is a battle-torn town with a canal running through it – much like the fictional town of Ramelle at the end of Saving Private Ryan, for those of you who are familiar with that film – in mid-late 1944, almost immediately post D-Day. Therefore, little details like planes with invasion stripes and such would be extra accurate!”